Allseas vessel up and running on Karish pipeline offshore Israel 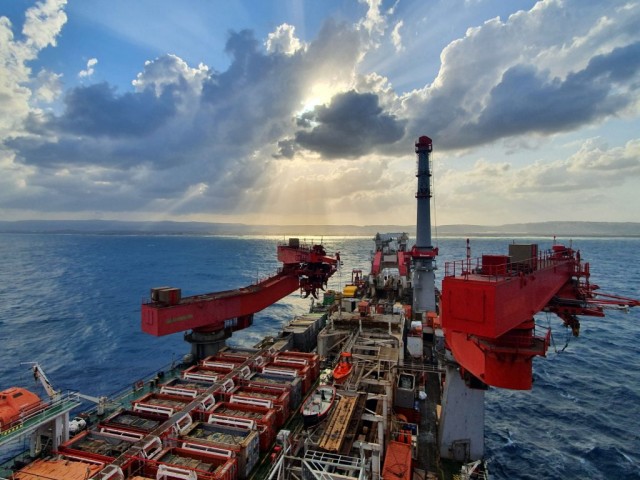 Solitaire returned to Rotterdam in April after completing its job for Equinor on the Troll 3 project in the North Sea off Norway.

It was the first time that the two Allseas-owned pipelay vessels, Solitaire and the Pioneering Spirit, were together in Rotterdam.

Following its return home, Solitaire then started preparing for its next assignment offshore Israel.

In an update on Friday, Allseas said that Solitaire is now up and running with pipelay on the Karish project offshore Israel after a successful 2.5-km pull-in at Dor, alongside the Allseas-installed Leviathan pipelines.

Over the next few weeks, the vessel will lay 90 km of export gas pipeline in water depths up to 1750 m, ending with a 100-tonne end structure (PLET), Allseas stated.

To ensure 24-hour production, Solitaire will be fed a continuous supply of some 7,500 joints by Allseas’ supply vessels Alegria, Felicity, and Fortress during the project.

Source:
https://www.offshore-energy.biz/photo-allseas-vessel-up-and-running-on-karish-pipeline-offshore-israel/
Write a comment
No comments yet. Be the first to add a comment!
By continuing to browse the site, you agree to our use of cookies.