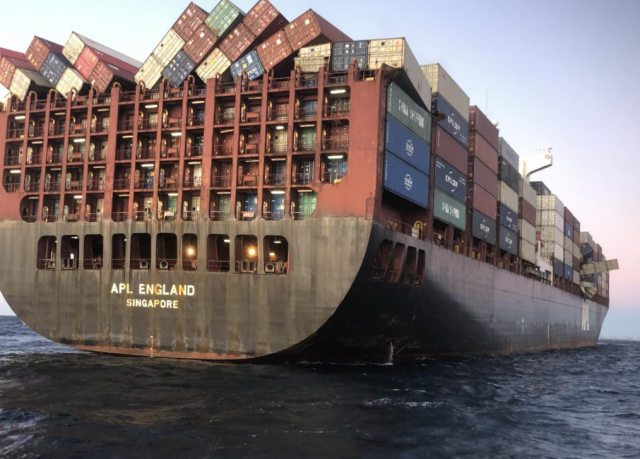 APL England, a 5,780 TEU containership sailing under the Singapore flag, lost around 40 containers in heavy weather while underway off Sydney, Australia, on May 25.

The ship reported a loss of main engine power, leading to heavy rolling and a collapse of container stacks, the Australian Maritime Safety Authority (AMSA) informed.

APL England was travelling from China to Australia when the incident occurred.

AMSA boarded APL England at the Port of Brisbane anchorage on Tuesday morning, and a surveyor conducted a seaworthiness inspection to establish the structural and operational condition of the ship following the collapse of container stacks on the deck.

“The outcome of this inspection will help inform if, and how, the ship might be brought safely into the Port of Brisbane in conjunction with Maritime Safety Queensland,” AMSA said.

“While it is still unclear exactly which containers have fallen overboard, initial indications are that the affected stacks contained a wide range of goods like household appliances, building materials and medical supplies. “

AMSA said that no dangerous goods appear to be in cargo in the affected areas.

The authorities are working closely with the ship’s cargo agent to confirm exactly which containers went overboard.

AMSA expects to have the outcome of the seaworthiness inspection and confirmation of the next steps by tomorrow morning.

“Once the ship is safely in port we will begin our investigation which will focus on the safety of the ship including whether cargo was appropriately stacked and secured on board the ship, and any potential breaches of environmental pollution regulations.”

AMSA has received a report of some medical supplies, such as face masks, washing up between Magenta Beach and The Entrance.

“This information has been passed on to NSW Maritime. These correlate to drift modelling of debris and are consistent with items listed on the ship’s cargo manifest,” the authority added.

Modelling suggests that debris such as this could continue to wash-up over the coming days.

The NSW Government is expected to lead response for shoreline clean-up, with support from AMSA.

Source:
https://www.offshore-energy.biz/apl-boxship-loses-about-40-containers-in-heavy-weather/
Write a comment
No comments yet. Be the first to add a comment!
By continuing to browse the site, you agree to our use of cookies.