For diesel engines, which require more maintenance on a routine basis than steam turbines, either a multi-engine configuration or an alternatively power supply possibility for a single engine configuration is required.
Immobilisation for carrying out maintenance work on a single configured two-stroke diesel engine has so far been considered an obstacle on LNG carriers.
Shuttle tankers in the North Sea were originally equipped with twin low speed engines and twin propellers. This ensured that approximately half of the propulsion power is always available, and that one of the diesel engines can be maintained without immobilising the vessel or compromising safety. However, now single engine ships are widely used for this trade, as for chemical carriers and LNG vessels, - a virtual proof of the inherent ‘self redundancy’ of such engines.
The International Association of (marine) Classification Societies’ (IACS) redundancy consideration for a reliquefaction plant for LNG carriers are as stipulated in Fig. 4. 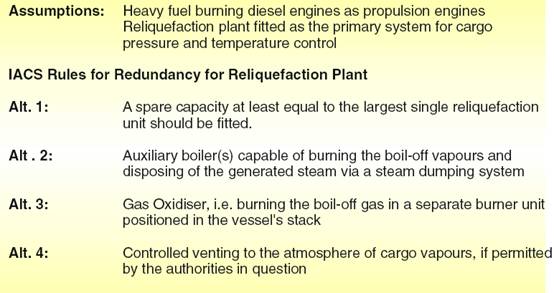 Fig. 4. Redundancy for LNG carriers
Redundant low speed engine propulsion concepts, as outlined above, ensure that sufficient power is available for safe navigation and, for the twin engine concept with completely separated engine rooms, even an additional margin towards any damage is obtained.
For LNG carriers, a twin engine configuration is proposed to alleviate any possibility doubt on reliability and redundancy.
The average lifetime of commercial vessels is 25 years, by which time the vessel are usually scrapped for reasons of economy. Diesel engines could operate for decades beyond, as all wear parts are replaceable. Long living diesels are seen mainly in power plants. The low speed diesel engines has, though, a considerably longer lifetime, which makes it relevant for LNG carriers with an average lifetime of up to 40 years.
The latest series of electronically controlled engines, The ME series, are particularly suitable for the trade discussed, as the control system software can be updated routinely.
Maintenance requirements for diesels are predictable, and parts supplies over the engine lifetime are guaranteed by the manufacturer and/or designer.
Vibration levels are fully predictable and controllable.
Hence, for 40 years’ use in LNG carriers, diesels are fully adequate.
Furthermore, the segregation of the gas cargo and heavy fuel for propulsion ensured with reliquefaction means that handling of gas in the engine room and surrounding areas is avoided, since the reliquefaction plant will be installed on deck.
Based on the technology described in the foregoing, the machinery to replace the steam turbine and boilers is therefore the following:

The twin-engine configuration is shown in Fig. 5. 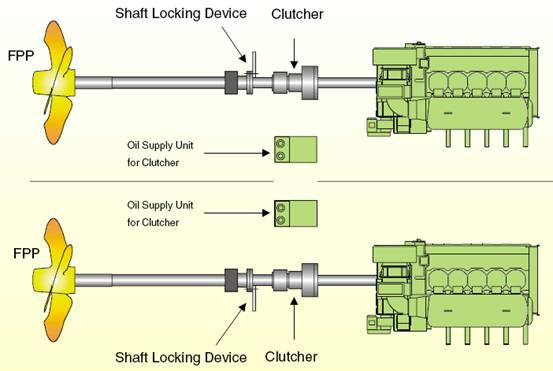 Fig. 5. Twin-engine configuration
The bridge and engine room control system shall be able to handle operation with both one (emergency) or two (normal) engines.
The bridge and engine room control system shall, in the case of  operation on two engines, be able to handle both individual control of the engines.
Simultaneous control consists of equality in power distribution, order for reversing, start of engines and spot of engines.
The control system shall, in case of failure on one of the engines, be able to ensure continuous operation with only one engine without jeopardizing manoeuvrability or safety of the ship or engines.
Typical propulsion power requirements for LNG carriers of different sizes are shown in Fig. 6. 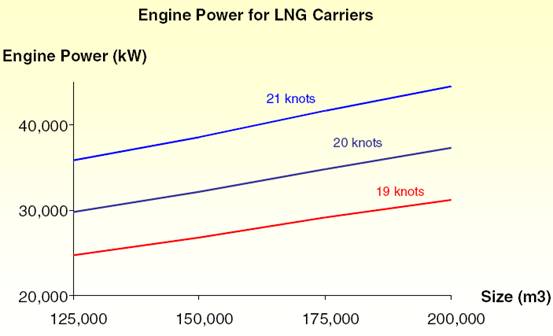 Fig. 6. Typical propulsion power requirements for LNG carriers
In the event of an emergency situation, with one engine out of service, the actual propeller curve for the working engine will be conceived as “heavy” up to 5-10%.
In the case of FP propellers, it is presumed that, in most cases, the shaft is declutched from the engines and the propeller wind-milling, while the engine can be repaired, alternatively that a shaft brake is applied.
In the case of CP propellers, it is presumed that the propeller is at zero pitch and the shaft brake is active. If engine repair or overhaul is to take place during sailing, declutching is necessary.
In either case, the working engine will have to accept the “heavy propeller”, i.e. higher torque, which basically calls for a changed engine timing.
With the ME engine concept, this can be done by push button only, activation “single engine running mode”.
This can be pre-programmed into the software just as the so-called “economy mode” and “low NOx emission mode”. Hence, the operating engine in case of non-availability of the other engine will be readily optimised for the purpose, and full mobility of the vessel ensured.
As per calculation, a speed of 75% of the design speed of the vessel can be obtained with a single engine in operation.