The boiler local control panel is provided with a selector knob to choose between 3 modes of the operation– “Auto”, “Manual” and “Stop”. In some ships, instead of operating from control panel, computerized operating program is designed to operate the boiler.

When not in use, the knob is selected to stop position, which de-energizes all electrical power to the boiler. Feed water pump and fuel pump has a separate power switch which needs to be operated in stop position if there is no requirement of fuel and water.

Once the auto operation is selected, the panel will send a signal to the starter of FD fan to operate. The forced draught (FD) fan will start for a set period of time controlled by the timer switch. Normally 3 to 4 minutes of time is allotted pre purging After the pre purging operation, power is supplied to the electrodes of pilot burner The solenoid valve installed in the line of pilot burner fuel line is energized and opened to allow the flow of fuel Fuel is supplied in the combustion chamber via pilot burner with electrodes creating spark Air is supplied in a controlled way through the air register in the furnace In the presence of heat source (spark), oxygen and fuel- flame is created inside the furnace The flame eye which is located in the furnace detects the pilot flame and sends a signal to the boiler control panel If there is a problem in pilot burner flame, the flame eye will not detect any flame which will trip the boiler If the eye detects flame, after a set period of time it sends a signal to the control panel, which then energizes the main burner fuel line solenoid valve and opens it Fuel is supplied to the main burner, which generates the flame in the presence of pilot flame and air registers A timer is installed and set to switch off the pilot burner after a period of time once the burner solenoid valve is open Flame eye is continuously monitoring the flame condition inside the boiler and if it does not detect any flame, a trip signal is send to boiler control panel A pressure transmitter is also installed with minimum and maximum pressure settings Once the maximum set pressure is reached, it sends a signal to the boiler control panel for stopping the main burner Since the boiler main burner is now off, due to the steam consumption the boiler pressure will reduce and once the minimum set pressure in the pressure transmitter is reached, it will give a signal to the control panel to start the overall operation again

Level control float/ probe: This type of system is fitted either on the top of the boiler drum or in a water chamber attached to the boiler drum, which shows the actual water level as of the drum. In probe type system, a metal rod is suspended in the boiler water drum with electrical voltage along with an ammeter included in the circuit. 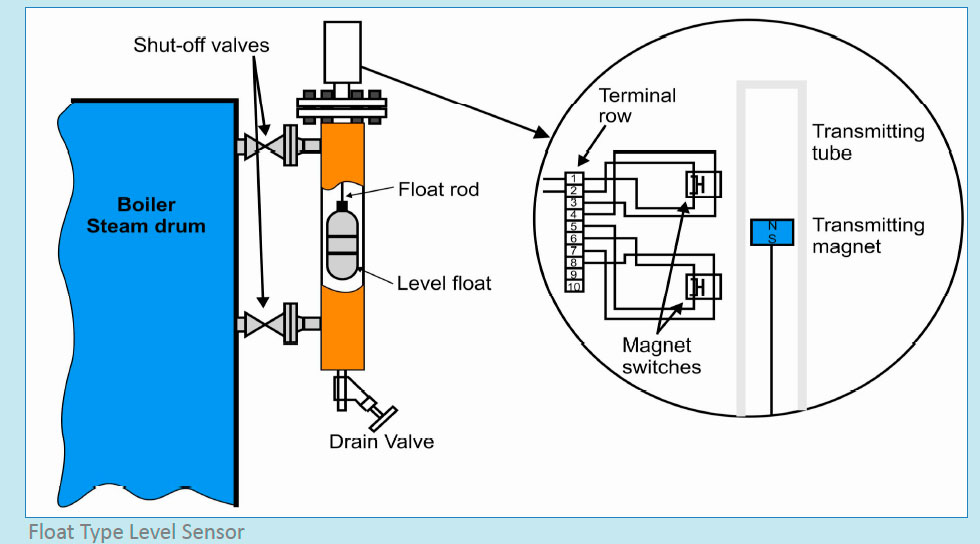 With the probe immersed in the water, current will flow through the circuit. If the probe is lifted out of the water, current will not flow through the circuit. The probe can be used to control starting and stopping of the feed water pump or to open the feed water valve integrated with level alarm (depending on the design of the system).

In a float type system, a float is suspended over the water and moves up or down as per the actual boiler level. The float is connected to a metal rod fitted with magnetic switches for starting or stopping the pump or opening and closing of the feed valve.

Alarms can also be integrated in this system by adding more magnetic switches in the desired level. Both float and probe type water level devices may give erratic readings in the presence of foam or oil in the boiler water.

Check all the electrical connections are tight If level indication is wrong and erratic, check for foam or oil in the boiler drum Regularly scum blow down the floating impurities For oil in water, boiler to be stopped and oil to be removed Check the working of the system on weekly basis for alarms and trips When boiler is de-pressurized, open the steel cap and clean the probes/float from salt deposits Ensure all the magnetic switches are working properly Check there is no damage to the float. Once it is pulled out, water pouring from the float indicates leakage 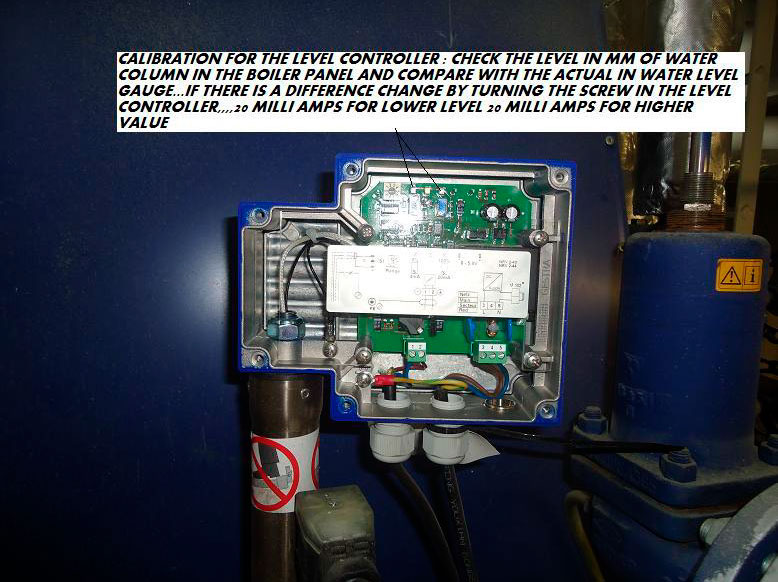 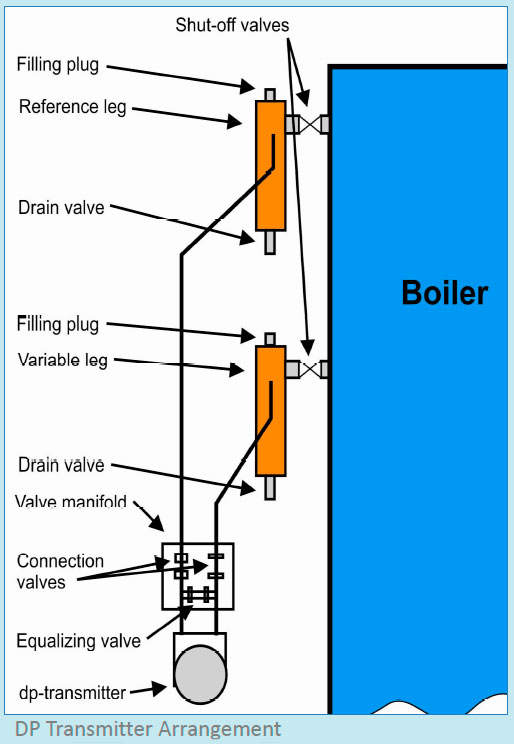 As the name suggests, it measures the difference in the pressures of two cells namely- Constant leg and Variable leg.

Blow down of variable and reference legs: The blow down procedure to be carried out at least once in a month and its frequency should be increased in case the water is contaminated with mud, salt, sludge etc.

Procedure for blow down:

A marine boiler comprises of different alarms that give pre-warning for a subcondition, which if overlooked can lead to operational and maintenance problems.

Following is the list of the alarms integrated in the boiler system:

In place of float, conductivity probes can be used to detect water levels. For low and high water level, two different probes operating on the principle of resistance to earth will be installed.

Each probe electrode acts as a simple switch, indicating low resistance to earth if it is in contact with water, or high resistance if the probe is out of water.

Low boiler pressure alarm: A pressure transducer is fitted in the boiler, which is connected to audio-visual alarm system. When the boiler reaches a set point of low pressure, the alarm will be sounded.

Cascade tank high salinity alarm: The cascade tank is fitted with a salinometer which detects the salt content of the cascade tank. If the salinity is on the higher side and gives an alarm, check for seawater leakage in the system.

High conductivity: A conductivity sensor is also installed to check the content of total dissolved solids in the boiler water. Conductivity depends on both ion concentration and ion mobility. Mobility generally increases with temperature and conductivity measurements are temperature dependent, increasing about 2% for each °C increase in temperature. 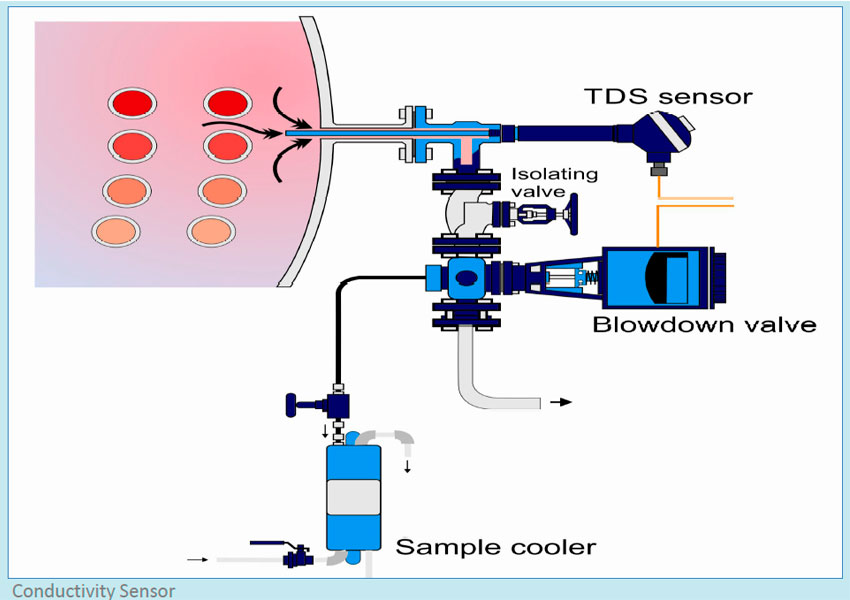 Oil detection alarm: Cascade tank is also fitted with oil sensor in the hot well water. If oil is detected in the cascade tank, all means to be taken not to allow the oil to go inside the boiler. Check and troubleshoot the cause of oil in the boiler water immediately.

Boiler is provided with different shutdowns to protect it from thermal stresses, overheating, loss of steam pressure etc. Following are important trips and cutouts installed in a marine boiler:

High high (H.H) level: The water level sensor also senses for high level. If the level controller is malfunctioning and water is continuously pumped inside the boiler, it will not only induce thermal stresses but also result in carry over. To avoid this, a high -high level trip is installed. 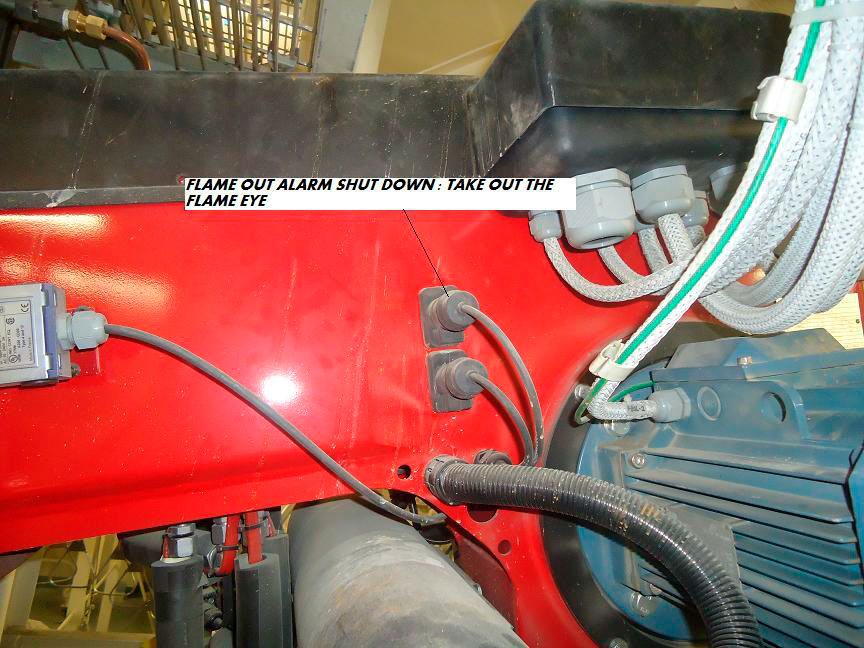 Flame failure: A photocell is fitted in the furnace, which continuously monitors the flame.

If due to any fault, the flame inside the boiler extinguishes, the photocell in the flame sensor will not detect any light and flame failure alarm will be sounded. This will protect the boiler from depressurizing.

High steam pressure: The boiler pressure is continuously monitored and if the pressure exceeds a set limit, the boiler will be tripped to avoid explosion (in case other safety system does not respond). 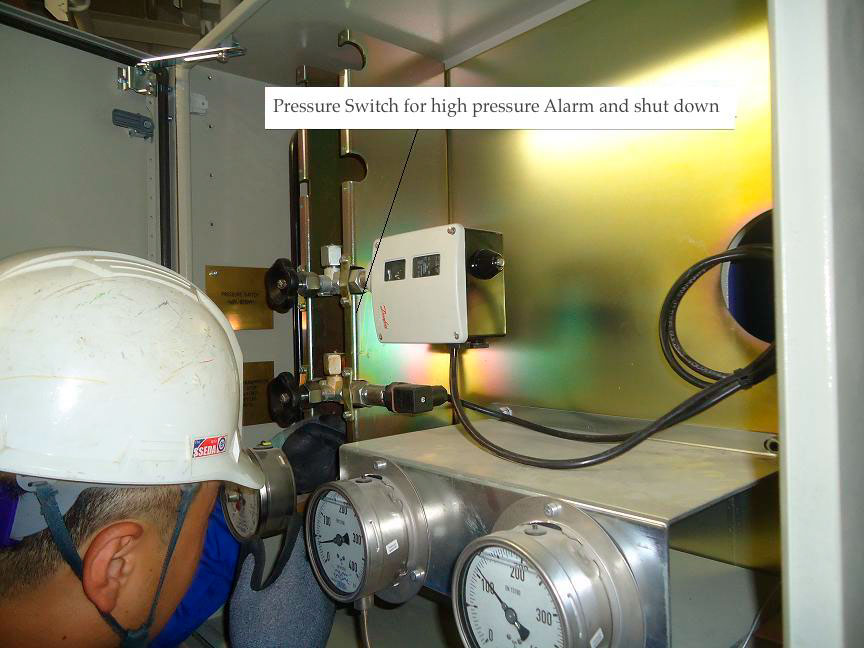 F.D fan failure: The forced draught fan supplies purging and combustion air to the boiler furnace. If the F.D fan has not started at its time slot, the boiler automation will trip the boiler.

Burner door open: The boiler burner door is provided with an easy lock, which can be opened so that the door can be swung out for handy burner maintenance and checks.

A contactor switch is fitted in the boiler door and boiler shell which when not in contact, the boiler won’t be allowed to start. 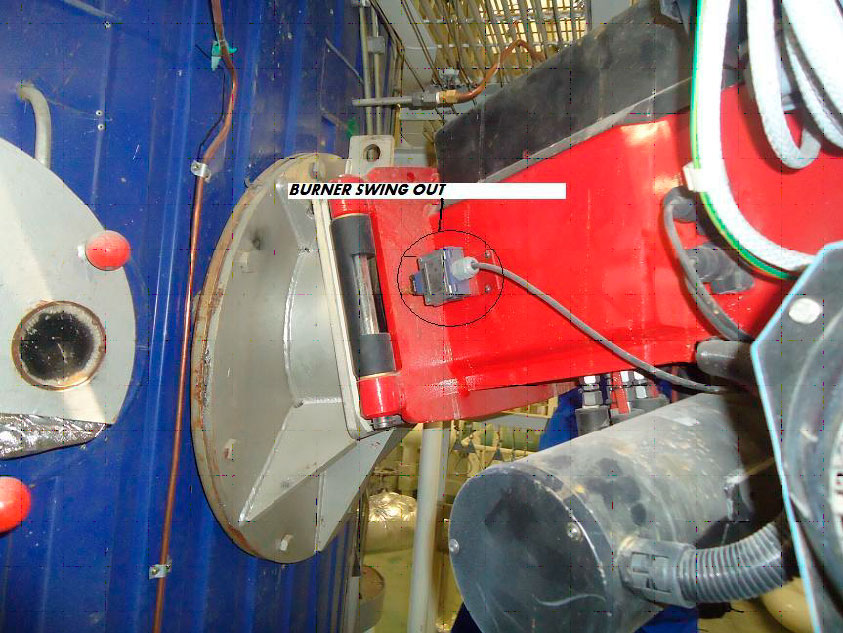 The boiler burner operation is automatically operated through sequence controller, which ensures not only efficient combustion but also safety of the boiler furnace by pre and post purging with forced draught air.

The automation in burner operation results in the best possible combustion provided the fuel used is of good quality and well treated. In comparison of manual operation, automation of Burner Systems will result in: 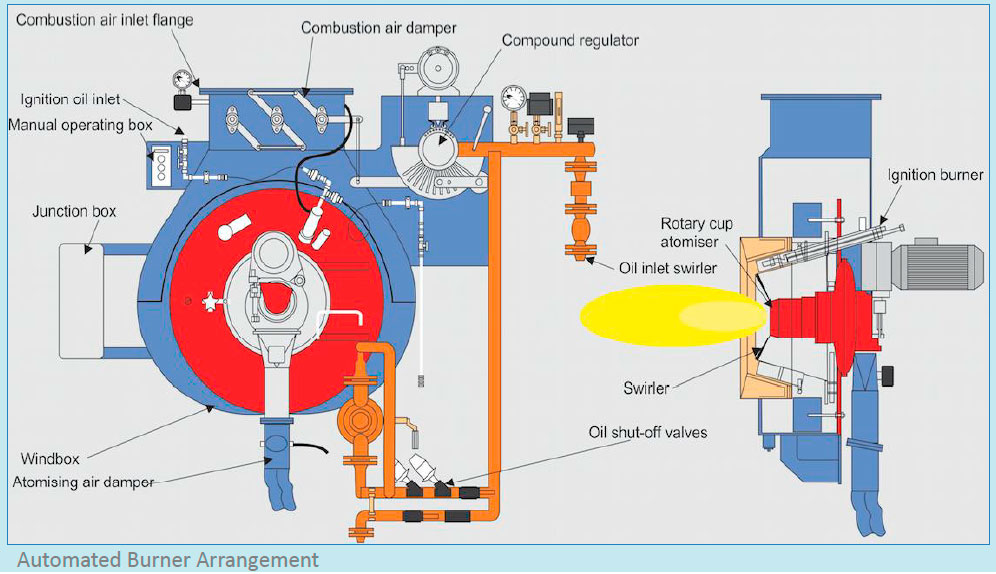 Below is the procedure of boiler burner control sequence:

In on/off control system, the feed pump is controlled by level sensor or a differential pressure transmitter, which is fitted in the boiler drum. When the water level falls below the “Pump On” level, the feed pump starts and runs till the water level rises to “Pump Off” level. This system is used for boiler with low steam quality requirement, as the pumping of large quantity of water at one go will reduce the steam quality. 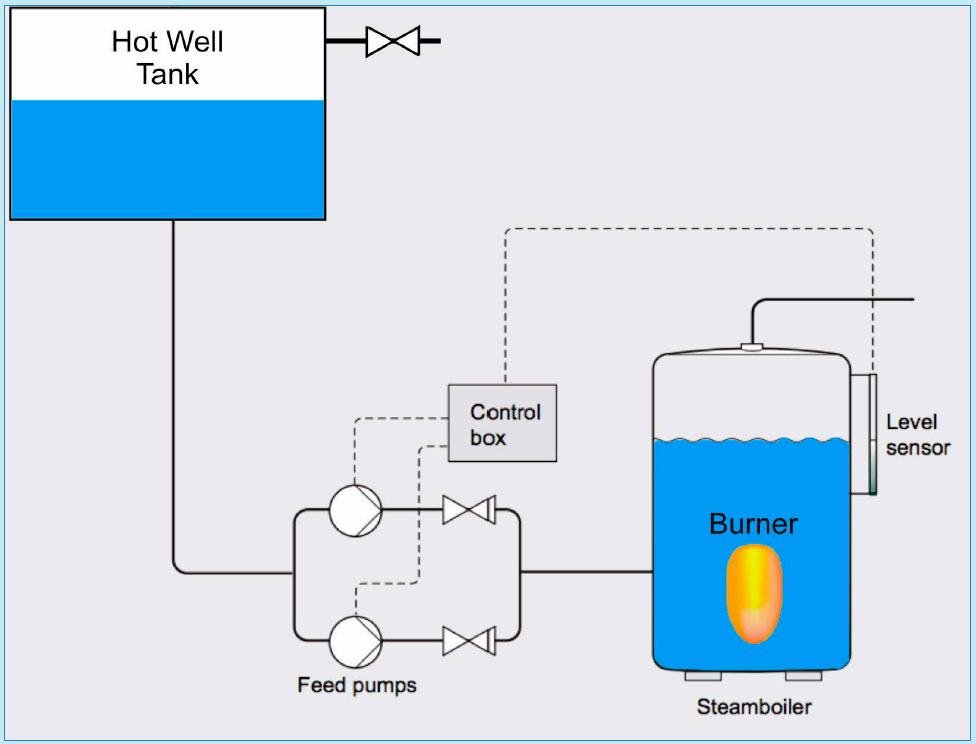 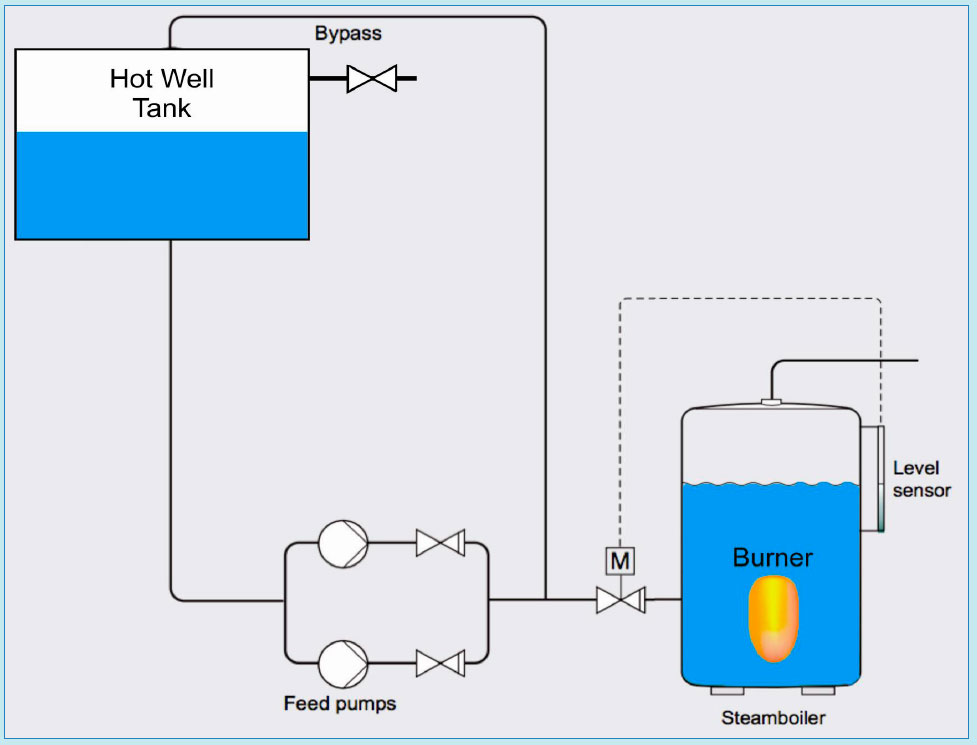 As this system operates smoothly, it is ideal for all types of steam boilers, both small and large, and it also minimizes the risk of over-boiling. Remember to size bypass valve according to the feed pumps minimum flow, which is 10 % of nominal flow for the pump. It may be good idea to stop the pump when the valve is closed, however this requires a signal from the valve.

The pump must be set on continuous operation, which increases energy consumption Requirement of bypass The feed valve is expensive Pressure loss across the feed valve

As the name suggests, the feed pump with variable delivery is responsible to maintain the water level in the boiler. 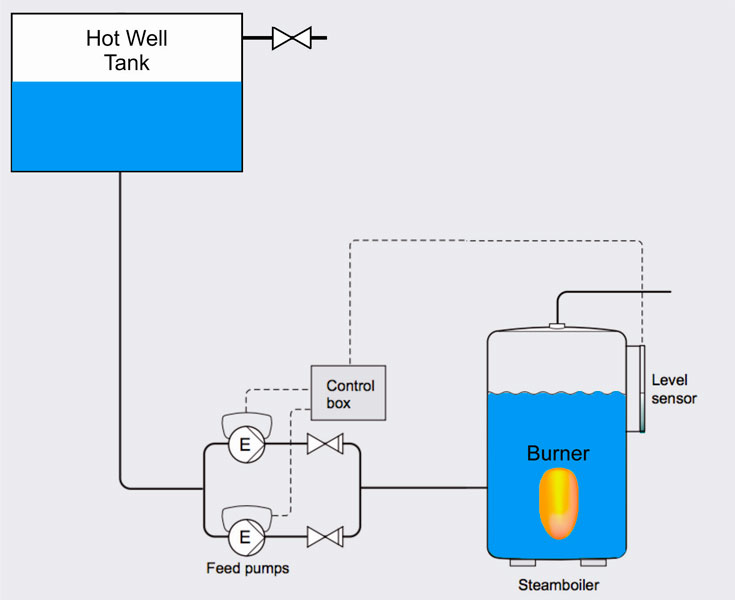 No control valve is fitted in the line and the signal received from level transmitters is taken as an input for supplying water in the drum. Hence, the water intake is controlled as per the steam demand. As this system operates smoothly, it is ideal for all types of steam boilers, both small and large, and it also minimizes the risk of over-boiling

A Guide to Boiler Operation and Maintenance. Anish Wankhede [2015]