Starting and Stopping of Marine Boiler

Starting a marine boiler in a normal condition:

It is to note that the following steps may not apply to all types of boilers and each type of boiler requires some additional steps to be followed as per its system design. However, the basic steps remain the same:

Ensure that the vent valve on the boiler is open and check there is no pressure in the boiler Check that the steam stop valve is closed Check that all the valves for fuel are open, and let the fuel circulate through the system until it comes to the temperature required by the manufacturer recommendation Check and open the feed water valves to the boiler and fill the water inside the boiler drum to just above the low water level. This is done because it is not possible to start the boiler below the low water level due to safety feature, which prevents boiler from starting. Also, it is to be noted that no overfilling of water occurs as it might lead to water expansion and over pressurize the boiler along with carry over Start the boiler in automatic mode. The burner fan will start the purging cycle, which will remove gases present in the furnace by forcing them out through the funnel After the pre-set purge time the pilot burner will ignite. The pilot burner consists of two electrodes, through which a large current is passed via the transformer, producing spark between the electrodes. The pilot burner is supplied with diesel oil and when the oil passes over, the burner ignites The main burner, which is supplied by heavy oil catches fire with the help of pilot burner Check the combustion chamber from the sight glass to ensure the burner has lit and the flame is satisfactory Keep a close eye on the water level as the pressure increases and open the feed water when the level of water inside the gauge glass is stable Close the vent valve after the steam starts coming out Open the steam stop valve Once the working steam pressure is reached, blow down the gauge glass and float chambers to check for the alarms

When starting a marine boiler from cold condition, ensure to fire the boiler with minimum rate of short intervals during initial period. This is to avoid thermal stresses within the boiler. Also the refractory may contain some amount of water, which may expand and lead to fissure if wrongly operated.

If the boiler is to be stopped for longer duration( for maintenance purpose) or is required to be opened up for survey, change the fuel to distillate fuel If separate heating arrangement for heavy oil is present then there is no need to change over to distillate fuel. The oil should be kept on circulation Stop the boiler automatic cycle Close the steam stop valves Close the boiler feed water valves When the boiler pressure is reduced to just over atmospheric pressure, the vent valve is kept open to prevent vacuum formation inside the boiler

Emergency shut down of the boiler:

A marine boiler is provided with an emergency shut down button located in the local operating panel and engine control room of the ship. The boiler must be shut down immediately when following situations occurs :

Preparing The Boiler For Repair or Long Lay-up

Following points to consider when preparing boiler for repair or for long layup:

Soot blow the boiler during operation Operate the burner for at least 20 minutes to remove the remaining water after soot blow Stop the boiler as discussed by normal stopping procedure Once the boiler is de-pressurized, drain off all the water from the boiler Open all boiler manholes and doors including the mud space Clean the boiler and check for limestone deposits

When boilers are taken out of service for more than a month, corrosion may occur on the internal surfaces of the boilers unless certain precautions are taken. Different methods for preservation of marine boiler are:

Dry preservation: In this method, the boiler is completely emptied and dried before it is taken off from the service. Procedure for dry preservation is as follows:

If very small amount of water is still inside the boiler, it should be removed by using vacuum cleaner If the boiler is cold, drying can be achieved by circulating dried air from the portable fan or by placing silica gel inside the boiler Before closing all the manhole doors, place a tray of burning charcoal to remove oxygen from the surroundings. Once the tray is kept inside, close the manhole door Any other oxygen binding chemical agents can be used for deoxygenation If the surrounding temperature is expected to drop below 0 °C , this method should not be used Before taking the boiler back in to service, current boiler water (with hydrazine) must be drained off before taking in fresh feed water

Boiler is one of the most important machinery systems on the ship. An economic and efficient working of a marine boiler requires timely maintenance and care while starting and stopping. Routine cleanup is extremely helpful in increasing the working life of the marine boiler, and it includes blow down of the boiler drum (to remove salts and impurities), soot blowing of boiler tube, water washing of tubes and blow down of the gauge glass (to check the true level).

To remove the precipitates formed as a result of chemical addition to the boiler water To remove solid particles, dirt, foam or oil molecules from the boiler water. This is mainly done by scum valve and following a procedure known as “scumming” To reduce the density of water by reducing the water level To remove excess water in case of emergency 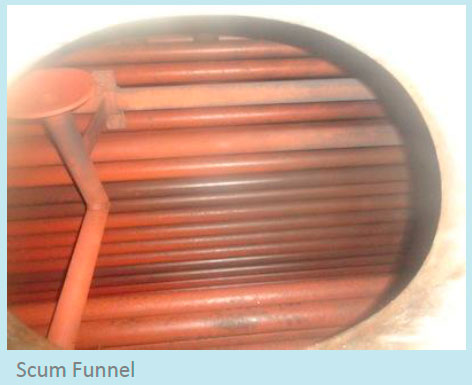 Procedure for scum and bottom blow down:

Below is the procedure for boiler blow down using the blow down valve located at the bottom of the boiler. In order to do scumming, instead of bottom blow down, the scum valve is to be opened. Steps for blow down procedure are as follows:

Open the overboard or ship side valve (1) first Open the blow down valve (2); this valve is a non-return valve The blow down valve adjacent to the boiler (2) should be opened fully so as to prevent cutting off the valve seat The rate of blow down is controlled by the valve (3) After blow down, close the valve in reverse order A hot drain pipe even when all valves are closed indicates a leaking blow down valve 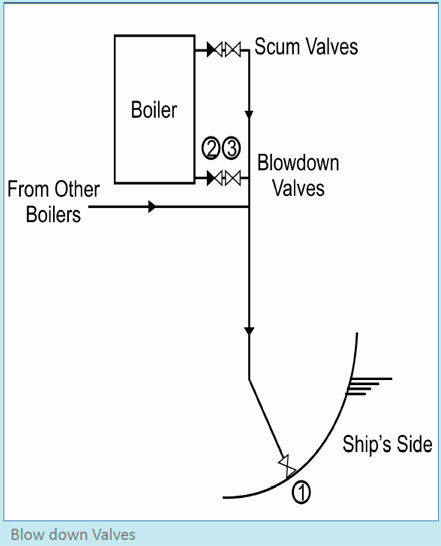 Due to burning of poor quality of oil or due to inefficient combustion, soot deposits are formed over the heat-exchanging surface, mainly on boiler tubes, reducing the heat transfer rate of the boiler. Soot blow arrangement is fitted in the boiler to remove such carbon deposits from the tubes.

Medium used to clean these deposits can be steam, air or combination of both. For economizer, soot-blowing granules are used instead of steam or air to remove soot deposits from the tubes. Following procedure to be followed when doing soot blowing:

Excess use of steam in soot blowing might cause erosion damage to the tubes. 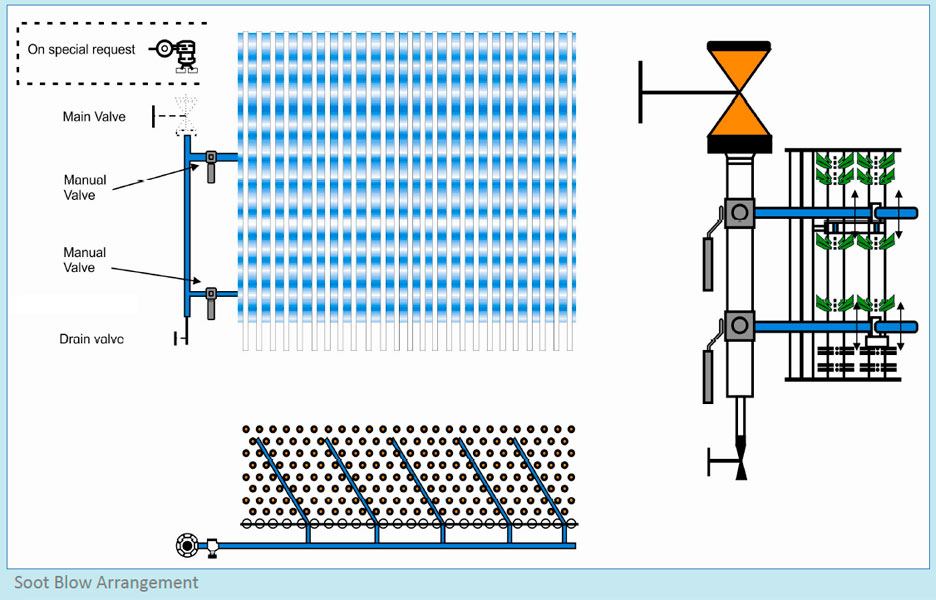 Water washing is carried out in water tube boiler and economizer to keep the heat transfer surface clean. Most of the deposits, which set on the tubes due to improper combustion or poor fuel quality, mainly consist of non-soluble particles that are held together by water soluble bonding material. Through water washing of the tube area/stack, these particles can be removed from the surface. 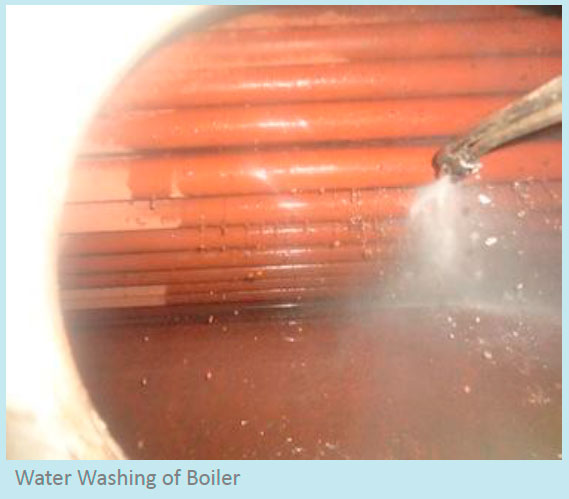 The boiler maintenance must be executed timely with required skills to ensure its safe operation. Engineers must ensure that the upkeep of ship’s boiler is in line with the planned maintenance as stated in the boiler manual and PMS of the ship. Following are a few recommendations for boiler routine maintenance:

Maintain Feed Water temperature at 85 to 95 °C Ensure hot well level controller is operating properly Monitor feed water temperature through hot well Excess Air/steam to be reduced or avoided Know the stoichiometric air-fuel ratio for the boiler under its current rating Keep a track on the content of combustion gases using flue gas analyzer to adjust the air-fuel ratio accordingly Check refractory and replace the damage refractory as soon as possible Check for any black spot in the outer plates of the boiler. This indicates the boiler shell has cracks and leakage Ensure insulation of the shell is properly maintained to minimize the heat loss and to maintain the boiler efficiency Avoid continuous long blow down Regular short blow down are also recommended Keep a regular check on boiler water chloride content Highest efficiency of boiler can be achieved at 2/3rd of the full load Avoid running the boiler at below 25% load as the efficiency reduces significantly below this load Recommended to install a dial type thermometer at the base of the stack to monitor the exhaust flue gas temperature When the flue gas temperature rises to about 20 °C above the desired temperature for a newly cleaned boiler, it is time to remove the soot deposits Follow the correct operating procedure when lighting up the boiler from cold condition Ensure to pre and post purge every firing and also make sure that the air vent is kept open while initially firing and shutting down the boiler Never leave a boiler operation at the hand of an assistant engineer or untrained operator, especially when lighting up the boiler from cold condition Never operate a soot blow system when the boiler is operating at high load Never operate the boiler at higher load as a regular practice. Boiler can be overloaded sometimes due to load demand but regular overloading will lead to high stresses and tube failure Never include sea water in any circumstances. If the hot well is filled with sea water (due to heavy leakage in the condenser), shut down the plant and rectify the problem Don’t operate the boiler when any water tube is leaking. Rectify the leakage at the earliest Don’t trust the water level indicator located at remote position i.e. in the control room. Keep a check through local gauge glass to get a clear picture Don’t skip the periodic maintenance of boiler and boiler auxiliaries, as it will decrease the efficiency of the boiler over a period of time

A Guide to Boiler Operation and Maintenance. Anish Wankhede [2015]