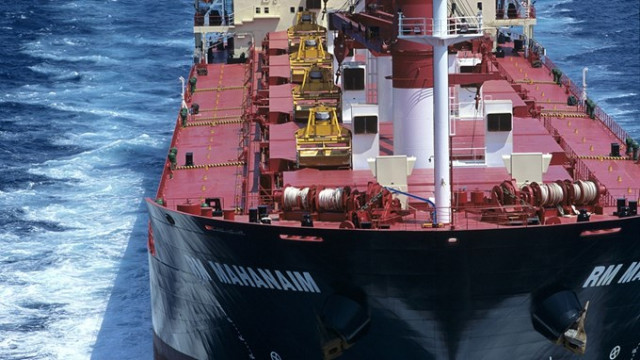 Prior carrying the trimming calculations, it is important that you take account of the following 3 things

- Always take penultimate holds (and not the extreme holds) for trimming esp for Panamax and above size. For ships having 5 holds, end holds shall be used. Although, this rule is not fixed and any hold can be used for carrying out trimming operations – depending upon the final trim requirement and/or space available in the holds.

Let us assume the case of Panamax Bulk carrier having 7 cargo holds. The intermediate Draft Survey is done and vessel has arrived at the trimming stage.

The drafts obtained are –

Step 1: Calculate the Cargo which can be loaded by calculating the Sinkage

Sinkage means how much more the ship can be submerged in the water by loading cargo such that it comes to the limiting draft.

Sinkage has a simple formula –

Note that the Current Midship draft is the VISUAL draft being noted and not the Mean draft of the ship. In this case, it is 13.22 mtrs.

I have not taken any SAG allowance, but if in your experience particularly when loading High Density Cargoes always take few cms of Sag allowance. It will aid you to not to overload the ship.

After calculating the sinkage, let us calculate how much cargo which will result in that sinkage.

The TPC value used is the one specified for your hydrostatic draft.

Trimming tables gives effect on ship’s fore and aft draft when 100 MT of cargo is loaded into a certain compartment. Trimming tables can be a part of Trim and Stability Booklet or can be provided separately. Ship officers shall well familiarize themselves with usage of trimming tables as different shipyards can present the data in such tables in different formats.

Once such format is specified below belonging to a bulk carrier. Note that Cargo Hold 1~5 are not mentioned explicitly but instead they are named R.1.01 ~ R.1.05.

However we shall keep things simple and use proper names for the compartment. In this problem I intend to use Cargo Hold 2 and 6 for trimming so this is how the data for the same will look like –

Above data shows the effect on forward drafts when 100 mt of cargo is loaded into a cargo hold no 2 and 6. The words TF and TA states the correction for Forward and Aft draft respectively. While the numbers following 11,12,13,14 is the mean draft of the ship which is used to enter the tables.

On interpolation we get the following values –

So let us move on to our next step.

Step 2: Calculate total trim change caused by the holds in which cargo is being loaded

This is done by making a simple table as follows –

n this table we are finding out the change of trim – obtained by taking a difference of the ford and aft sinkage values. The important thing to note here is we have to KEEP the signs active.

Note in the case of Cargo Hold No 2 – the corrections are actually added when the difference is taken and similar case is with the values of Cargo hold No 6. The total change of trim is obtained by ADDING values for both holds as shown in red box.

Step No 3: Calculating cargo to load in 1st Hold (Hold No 2)

So as you can see we need to load 526 tonnes of cargo in Hold No 2 in order to bring the ship to even keel.

Step 4: Calculate the cargo to be loaded in Second Hold (Hold No 6)

From above we know that 526 tonnes is to be loaded in Hold 2. So the balance cargo to load is

Now this cargo needs to be distributed in Hold 2 and Hold 6 such that the ship is loaded to her limiting draft and NO TRIM CHANGE IS CAUSED (as we need the ship to finish loading on an even keel). Let us first calculate the cargo which can be loaded into HOLD NO 2.

This can be calculated by the following formula

Cargo Hold No 2 needs to load 508 tonnes to bring the ship to even keel. Thereafter, Hold No 2 and Hold No 6 needs to load 526 tonnes and 756 tonnes respectively in order to bring the ship to her draft while keeping the trim same ie Even Keel. This calculation needs to be done prior carrying out the Trimming and therefore the calculations shall always be checked and re-checked. Keeping these formulas in mind will save you a lot of time.

43
CrewTraffic
Write a comment
No comments yet. Be the first to add a comment!
By continuing to browse the site, you agree to our use of cookies.