Inland seas are defined as landlocked waters linked to oceans and major seas via straits or channels. Marmara sea is one such water body surrounded by the transcontinental nation of Turkey, dividing the nation into its Asian and European parts.

In the northeast, it is connected to the Black sea through the Bosphorous Strait whereas the Dardanelles Strait joins it to the Aegean Sea in the southeast. Both the Aegean and Marmara Seas are considered a part of the Mediterranean sea.

The Marmara sea is an important component of the Turkish Straits System that consists of the Istanbul Strait and Canakkale Strait that link the Aegean and the Black Sea with the Mediterranean seas. The sea has a humid subtropical climate with hot summers and cold and wet winters. It does not freeze during winters however the towns on its coast receive snow occasionally.

According to Geologists, the Sea of Marmara was formed due to severe tectonic plate movements in the Miocene and late Pliocene periods around 2.5 million years ago. The development of the North Anatolian Sheer Zone also changed the region’s geology leading to the formation of many bays and gulfs surrounding the Marmara sea.

1. Marmara sea is considered the smallest inland sea in the world2. It has varying levels of salinity- a truly unique phenomenon3. Houses the second-largest island of Turkey in its waters4. Marmara sea was extensively used by Ancient Greeks5. An important maritime gateway dotted with major port cities and beautiful towns6. A marine biodiversity hotspot of the Mediterranean region7. Declared a Special Environment Protection Zone in 20218. The North Anatolian Fault passes through the Sea of Marmara9. It is enriched with waters from three rivers and has numerous Gulfs10. The famous 1509 earthquake occurred in the Marmara Sea

1. Marmara sea is considered the smallest inland sea in the world

Covering an area of 11,350 km2, the Marmara Sea is the smallest inland sea, measuring 280 km lengthwise with a maximum width of 80 km at its broadest point. Marmara’s waters reach a maximum depth of 1370 m in the center of the sea while it is 494 m deep near the shores. On the other hand, the Black sea is 2212 m deep and spans 436,400km2 while the Mediterranean sea covers more than 970,000 square miles and has one of the deepest waters. 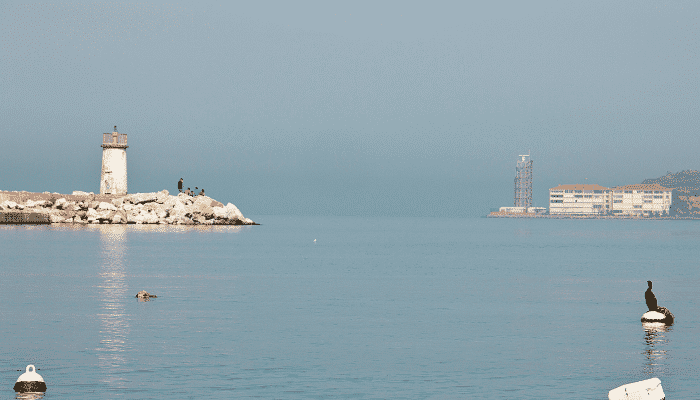 The western limit of the Marmara sea comprises the Dardanelles barrier while its northeastern shore is defined by the narrow waterway linking the two Capes of Anatoli and Rumeli.

2. It has varying levels of salinity- a truly unique phenomenon

The Marmara sea has uneven water salinity at different water depths which is truly remarkable. The salinity differences have led to the development of two-layer stratification and two different current systems. Low salinity water from the black sea pours into the Marmara sea via the Strait of Istanbul and denser and more salty water drains through the Canakkale Strait into the sea. Both the water masses are separated from each other by a 25 m deep pycnocline.

The surface water salinity of the Marmara sea is roughly 22 parts per 1000 which are slightly greater than the Black Sea’s salinity. The water is more saline near the seabed with averaging salinities of around 38 parts per 1000, comparable to the salinity of the Mediterranean sea. Interestingly, this highly dense and salty water does not come up to the surface.

The constant flow of freshwater from the rivers originating in Anatolia keeps the salinity levels in check leading to the growth of floating, plant-like organisms called phytoplankton.

3. Houses the second-largest island of Turkey in its waters

The Marmara island also known as Prokonnesos in ancient times is the largest island in the Marmara sea and the second-biggest Turkish island after Gokceada which is positioned in the northeastern Aegean Sea at the mouth of Saros Bay.

Spanning 117.8 km2, Marmara island is surrounded by calm waters and short beaches. It also sustains four villages and two towns on its oval-shaped coastline abundant with wild fruits. The island has a mountainous topography and is covered with dense forests and inland lakes. Ilyas Tepe reaches a height of 709 m and is the highest peak on the landmass. 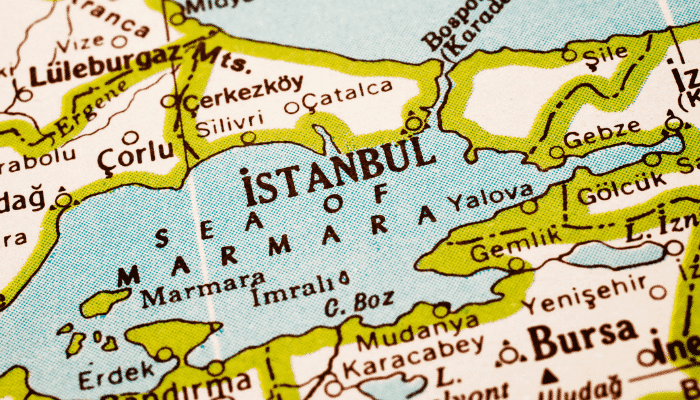 Its capital town lies on the southwestern coast and has a minuscule population dependent entirely on fishing, agriculture, and horticulture, especially olive cultivation. The latter are transported via small boats and vessels to the nearby regions and aid in the growth of the island’s economy.

Marmara island is renowned for its marble quarries located in its western part. They have been operational since times immemorial and presently, the precious stone is exported regularly to Turkey and is one of the finest quality marble extracted in the Mediterranean region.

Another prominent island group in the Marmara sea is the Princes’ islands or the Princes’ Archipelago lying off the coast of the Turkish capital city of Istanbul. It consists of four islands namely Bukukada which is the biggest island covering 5.46 km2 followed by the Heybeliada, Burgazada, and Kinaliada islands. It also has five smaller islands, the most popular being Sedaf Adasi or the Mother of Pearl island. Interestingly, one of the islands of the archipelago has been converted into a high-security prison for the only prisoner, Abdullah Ocalan who was the head of a Kurdish nationalist organization until 2008.

The Greek colonization of the Mediterranean and the Black sea regions between the 6th to the 8th centuries led to the establishment of many colonies that grew into important urban centers and citadels of the civilization.

Most coastal settlements near the Propontis or Marmara sea coastline were founded in the 7th century. Some of them were Astacus, Chalcedonia, and the famous city of Byzantium, which later became the capital of the eastern Roman Empire and an important city of the Ottomans in the 15th century.

Marmara was called Propontis by the Greeks, derived from the words pro meaning before, and Pontos which was used for the Black sea since they sailed through Marmara to reach the Black sea. It is also recounted in Greek mythology as a site of a battle between the Argonauts and their enemies.

The sea derives its present name from the Turkish word Marmaron meaning a shining stone or a crystalline rock referring to the availability of exquisite white marble on the nearby island of Marmara. It has been used extensively in the adornment of the famous Hagia Sophia in Constantinople, in the Herculean Sarcophagus housed in the British Museum, and in many of the churches and mosques constructed during the medieval period.

The sea of Marmara serves as a crucial navigational waterway for shipping Mediterranean goods especially crude oil and petroleum to Europe from East Asia and Russian ports. It also has a flourishing fishing industry and supports hundreds of local fishermen’s families living near its coastal areas.

An important port facility known as Marmara Ereglisi is located on the northern shores of the Marmara sea. Comprising a single jetty for the discharge of natural gas, this LNG terminal can also handle diesel fuel and has 6 storage tanks. The Batangas terminal is another significant port of the Marmara sea, possessing two CBM buoy moorings that deals with more than 24 LPG ships, 60 LNG carriers, and 8,000,00m3 of gas annually. The OPET terminal, the Marmara island port the Marmara transportation pier are other busy facilities. 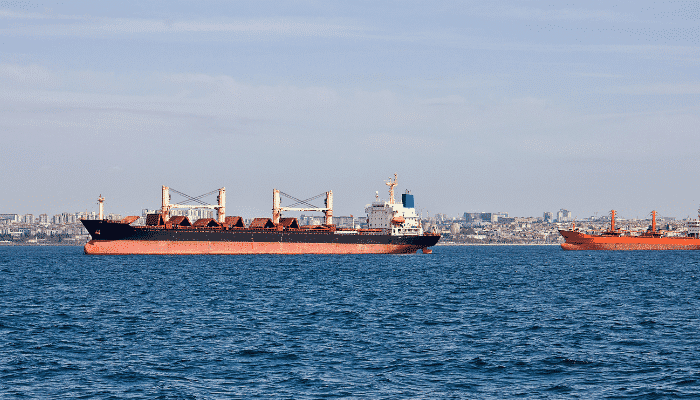 Metropolitan cities and commercial towns such as Istanbul, Izmit, Balikesir, Yalova, Tekirdag, Bursa, and Çanakkale are situated near the Marmara sea. Some of these places are a must-visit for all travel enthusiasts. While its beaches do not offer the grandiose experience of the Black sea or mediterranean sea coasts, it certainly makes for a fun-filled trip.

Flaunting exquisite Ottoman architecture, historical centers like Edirne and Bursa are the most famous for their palaces, century-old gardens, and traditional mosques. Other popular places include the small beach and fortress town of Kıyıköy and the Saros Gulf resort of Irakli. Tourists can cross the Marmara sea and reach the southern shores using ferries and cruises plying from the passenger terminal of the Tekirdag port.

Southern Marmara provides evocative scenery as it has two beautiful lakes namely the Ulabat Gulu and the Manyas Golu, supporting small village communities. A famous bird sanctuary is also located here. Uludagrange village is popular for holding skiing competitions in winter while Cumalikizik is a famous showcase village. Different ethnic communities can be found in the Marmara region such as the Greeks, Jews, Armenians, and Turkish Muslims.

6. A marine biodiversity hotspot of the Mediterranean region

The Sea of Marmara supports a diverse marine ecosystem that serves as a transitional zone between the Mediterranean and the Black seas. It is also a vital ecological marine gateway and plays an important role in the dispersal and migration of aquatic organisms. 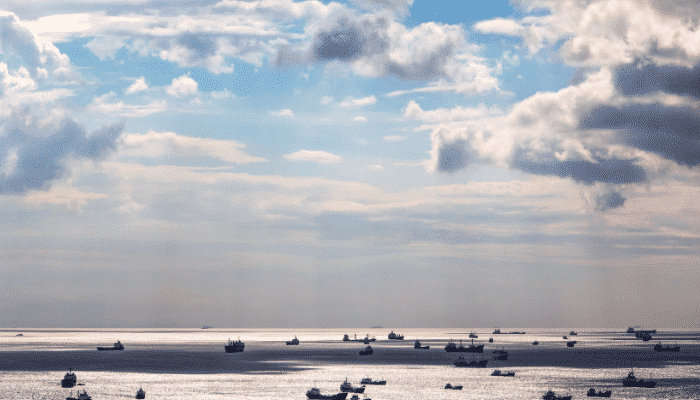 Marine biologists have reported that over 230 species of fish and 13 shark species are found in the waters of the Marmara sea. Anchovies, sardines, horse mackerel, mullet, flounder, garfish, and tuna are some of the commonly found fish in the sea. It is also rich in marine flora and houses over 510 species of underwater plants. A few endangered fish are also found in the southern part of the Marmara sea. Additionally, 115 different kinds of phytoplankton have been recorded in its northeastern waters.

The Marmara Sea was bestowed with a protection status for preserving its waters from heavy pollution that has resulted in the formation of sea snot. Renowned for its clean and fresh waters and abundant fish, the Marmara sea is now suffering from sticky mucous-like coasting that covered its surface and even the coasts, threatening aquatic life and the fishing sector.

The increasing marine mucilage is evident of a greater underlying problem which is rapid climate change that has altered the sea’s average temperature. Although the Turkish government started a clean-up campaign, it is not a permanent solution.
Sea snot is also formed when untreated sewage water containing nutrient-rich organic matter is dumped into the water bodies without proper treatment. Hence the government has imposed tighter regulations on companies to prevent them from polluting the sea any further. Habitat destruction and overfishing are other major issues threatening the Marmara sea.

8. The North Anatolian Fault passes through the Sea of Marmara

The Sea of Marmara lies in the North Anatolian Fault which is a major continental transform boundary formed by the convergence of the Eurasian and the Anatolian-Aegean plates. It spans 1500 kilometers and runs 20 km south of Istanbul and extends westward across northern turkey through the Marmara and the Aegean seas.

It is similar to the San Andreas Fault located in California in terms of its size, length, and slip rate which is roughly 20 mm every year. The regions near the fault are seismically active zones that have witnessed disastrous earthquakes with a magnitude of over 7, over the past centuries. The fault became active in the Late Miocene period, roughly three million years ago.

9. It is enriched with waters from three rivers and has numerous Gulfs

Three major rivers of the region, namely Simav, Biga Cayi and Nilufer flow into the Marmara sea carrying fine granular silt, sand, and sediments. The Simav is a river of Anatolian turkey and its basin covers 22,400 km2. Biga Cayi river flows from Cannakale province of northwestern Turkey whereas the Nilufer river originates from Mount Uludag and is known for its beautiful water lilies. 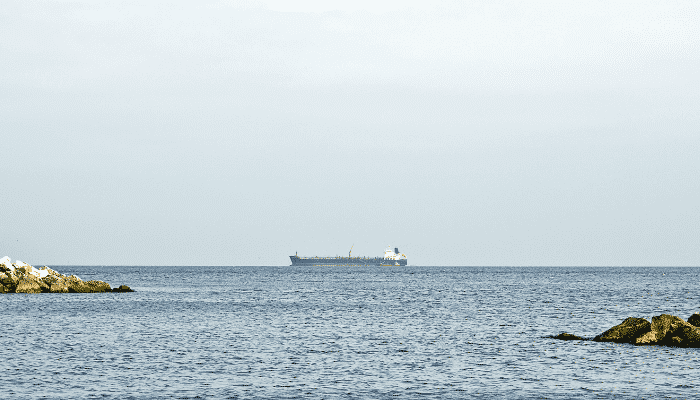 10. The famous 1509 earthquake occurred in the Marmara Sea

Also known as Kiyamet-i-Sugra in Turkish or the Lesser Judgement Day, a devastating earthquake accompanied by a massive tsunami and 45 days of aftershocks, occurred along the faultline passing through the Marmara sea on 10th September 1509. It killed more than 10,000 people, destroying the city of Istanbul and its adjacent areas. The earthquake is mentioned in great detail in the Turkish historical records which emphasize that it was the biggest earthquake of the century.

14
SeaKnow
Write a comment
No comments yet. Be the first to add a comment!
First time here?
By continuing to browse the site, you agree to our use of cookies.