Oman and its seashores have a natural inheritance of mineral and gas deposits. This connects with its geographical location across the Gulf of Oman. It uses the Arabian sea for major container and oil tanker traffic for the major ports in Oman.

With such features, shipping cargo amounts to 7 369 million current USD trade in Oman. However, 53% of the stake in this goes to the oil cargo of different nature.

The container and finished goods stand second in the line with a share of 30%. This is visible in the 51 752 million USD business of merchandise trading in the region every year. Hence, the industrial setup of Oman depends heavily on a fair cargo exchange without disturbances.

To make sure this sector thrives, 5400-6200 vessels touch Oman’s shores every year. This includes 80% traffic of large seagoing ships with international cargo freight. The majority of it occurs with their neighbouring UAE, giving a trade index of 0.476.

In this article, we review the 5 major ports in Oman and their trading features. We also focus on the geographical features, identification, and cargo handling aspects. It includes the financial and networking aspects of the trading too. 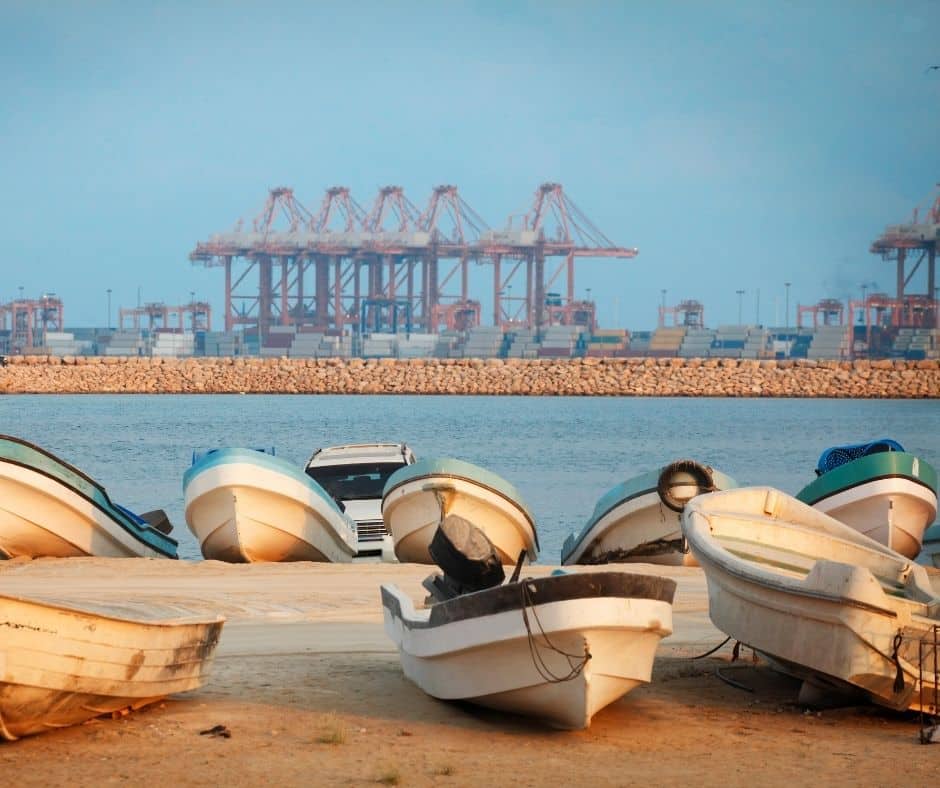 The port of Salalah has a total of 6 large-size berths for container and oil cargo operations. Its establishment is from the year 1998 with simultaneous handling of goods. At present, the facility operates under the authority of the Salalah Port Services.

A large number of major oil groups along with government shares have involvement in the project. Hence, the terminal sees 3.5 to 3.8 million TEU on an average for the last decade.

Oman has a port liner shipping index that exceeds the value of 55. This places it as the fastest container handling terminal across the whole world. The terminal also stands 6th in the list of most efficient port facilities all over the globe.

The container handling peak of Salalah in 2017 has over 4 million TEU to its name. The operations include large 25 Post-Panamax 68 and mobile cranes. These range between 60 to 150 MT for the handling of the TEU landing at the facility.

For such super container vessels, the alongside depth lies between 16 to 18.5 meters. This comes from a manoeuvring channel that goes as deep as 20 meters. Meanwhile, the loading speed merit of Salalah comes from its 4-speed loaders too.

The facility also includes 9 forklifts for cargo handling in container form. In addition to this, the cruise terminal at Salalah has major significance. It sees over 25 to 36 thousand passengers through major cruise line traffic.

Over 2200 local staff form a part of the terminal-handling facilities at the Port of Salalah. Moreover, an inbound railway terminal expansion will see the handling rate improvement by 23%. 4 major tug operators are responsible for the berthing and unberthing operations in the region.

Unlike the other major ports of Oman, Salalah has a high container dependency. Hence, the warehouse facilities cover over 25% of their size. The whole facility is over a region of 765,000m². 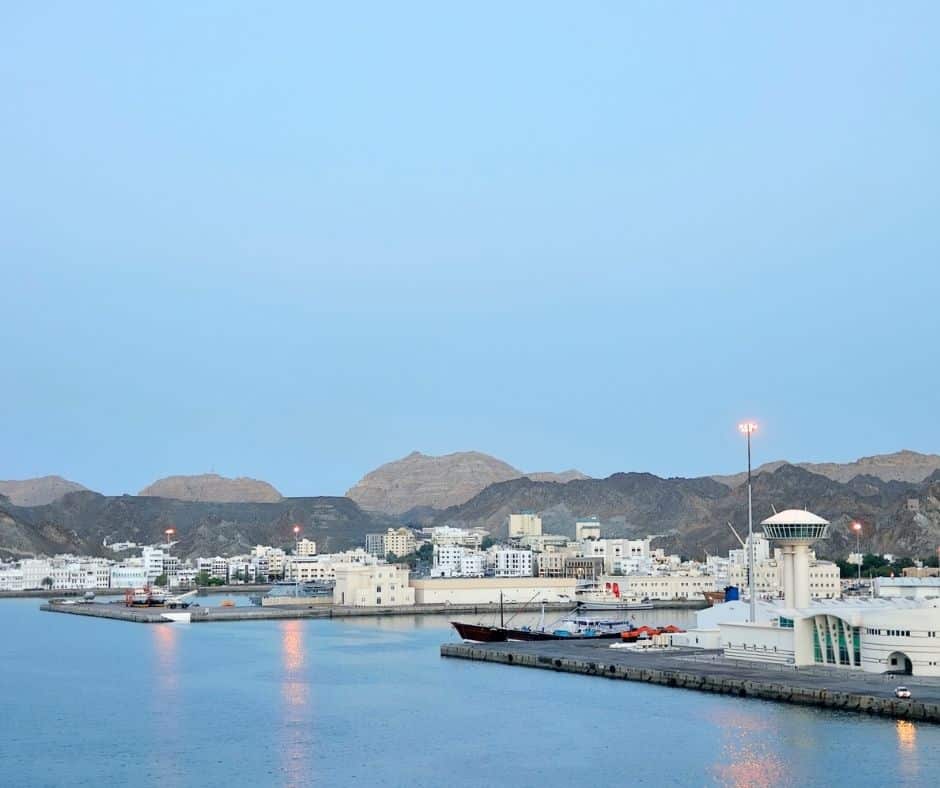 The port of Sultan Qaboos is presently under its moving initiative for conversion to a cruise facility. However, the port has a rich history of cargo handling, as the biggest in the region of Muscat. In the peak, the port and its operation were through 14 berths for seagoing traffic.

During the early 2000s, the port shows a capacity of 820,000 MT of cargo with 250,000 TEU. Its longest multipurpose berths vary up to a size of 458 meters. Each of these berths shows a working coefficient of 0.75 during operational days too.

At present, the port’s handling activities are null due to pollution and traffic reasons. Hence, the development of the corridor will also provide a green range for cruise shipping operations.

Meanwhile, the cement and other operations at piers 7 and 8 are equally significant. The major operating machinery for unloading includes grabs with a 5.0 MT capacity rating. On average, the cement handling capacity figures at these piers go up to 660,000 MT yearly.

During its peak operations, the facility has records of 1500 workforce working simultaneously. However, the announcement of 2014 for passenger terminal conversion is to make it a tourism hub. The relocation of the Port of Muscat is undergoing with a steady pace for aiding the existing facilities.

The berths had an occupancy rate of 60%, making it the 2nd busiest in the area. The sheer size of the Shutaify Bay Yard area with 112,500 square meters area provides special expansion abilities. 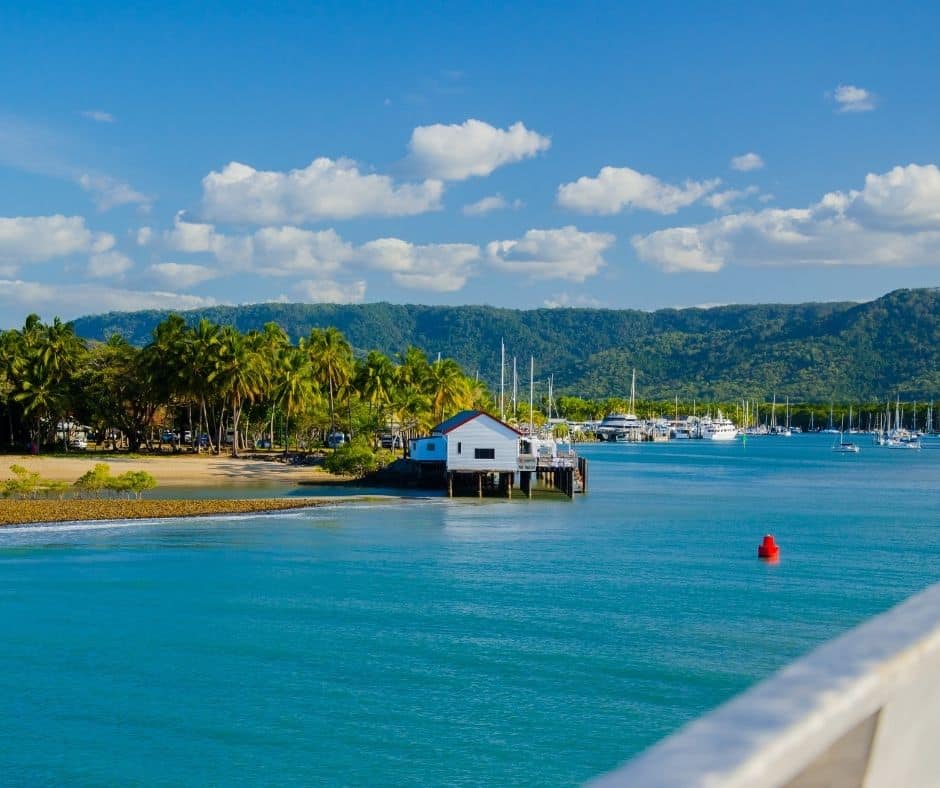 The port of Duqm is a new yet highly profitable port for the region of Oman. Its establishment is only as old as 2013, with drydocking and cargo handling facilities. The port’s figures in 2019 show a revenue generation of 1 billion USD. However, its maximum figures are in the range of 1.5 billion USD.

Duqm is also one of the major ports in Oman operating in the special economic zone. The handling and its operations also come under the regulation of the zone authority for trade promotion. However, the ownership rights of the facility belong to the government of Oman.

In addition to the commercial operation, the port of Duqm is a defence base. It has special collaborations with the UK and Indian governments to facilitate their carriers.

The port of Duqm has 3 continuous quays for multipurpose cargo handling. However, the other quays are dual-end and operate with the double island design. The facility’s drydocking services provide more than 150 vessel docks within a year.

It is also unique in its class facility within the region, with handling capacities up to 400 MT. At present, the range of operation extends over 2.2 km. Meanwhile, the waters in this area range 18 to 19meters for the alongside depth.

The drydock facilities are also available for the repairs of the military vessels of strategic partners. This also includes the naval dockyard for local and international usage.

The network for dry bulk cargo handling is over an area of 10 hectares. This also includes a total quay length of over 300 meters for berthing. Meanwhile, the handling facilities include 2 gantries of 125 MT capacity with 2 additional grabs of 12 MT.

However, the container terminal ranges much bigger with 34 hectares area. This also includes an alongside quay length of 1100 meters and more for super container vessels. Its handling facilities include the spreader bridge along with the manual spreader too. 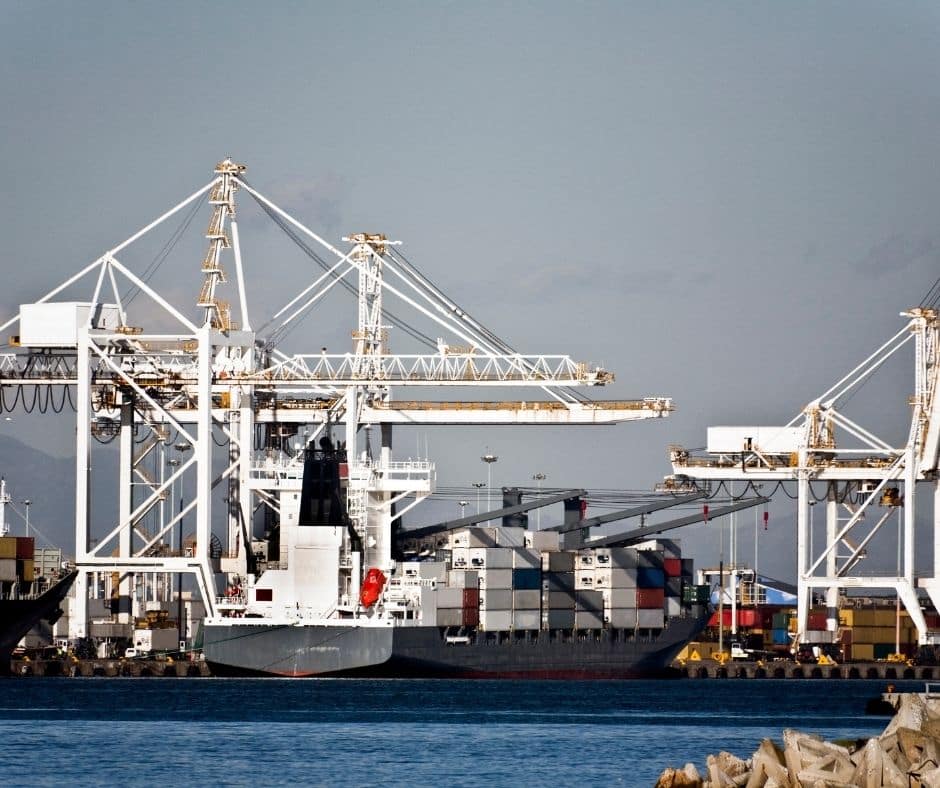 The port of Sohar qualifies as the second biggest amongst the major ports in Oman for cargo volume. Every year, the facility handles over 60 million MT of cargo of different nature. The terminal exists since the year 2002 with relatively modern expansions roots.

Moreover, it is a joint venture of the Oman authority along with the port of Rotterdam. It falls under the free zone area, the globally attractive lobby for modern shipping investors.

More than 3000 ships across all sizes undergo handling operations at Sohar every year. The STS facilities also include the conduction of bunkering facilities for the seagoing vessels.

The bulk-friendly nature of the terminal comes with the Valemax loading capacity at Sohar. On average, the terminal sees 2000+ bulk vessels for year-round operations.

The approach depth for alongside operations at the bulk terminal is 16 meters. Meanwhile, the Valemax terminal goes up to 22 meters alongside the draft. Hence, the maximum allowable displacement for cargo handling reaches up to 458,000 MT.

These facilities have the fixed and movable cranes for the storage of cargo. However, the depth alongside container cargo is 18 meters. The facility also has conveyor and road options for handling quick bulk cargo.

The network consists of more than 2000 employees engaging in cargo operations of a different kind. This falls under the Sohar Industrial Authority for operational and official purposes. The agreement dating back to 2010 means the port operates in a 4500-hectare wide free zone.

At present, the port authority of Rotterdam shares 50% of the operational and revenue stakes. Hence, the organization of different cargo berths reflects their planning schemes. This includes an operation for Alumina, oil, and natural gas cargo at specific locations.

The port of Qalhat is Oman’s major LNG handling facility for cargo operations. It operates with 2 major LNG loading and discharging berths of the highest international safety standards. The permissible length for gas carriers to berth alongside goes up to 315 meters.

Meanwhile, the allowable draft for a vessel of this size is up to 12.5 meters. The port facility operates with a 76% majority rights by the state of Oman.

Due to its LNG richness, the port connects with over 120 major countries for direct shipping relations. The facility is spread over an area of 70 hectares that includes the handling facilities for dangerous cargo.

The cargo handling limits allow gas carriers with displacement up to 143,000 MT to operate. However, the allowable draft for tankers and crude oil carriers goes only to 7.7 meters. On average, 125 to 150 sea-going gas carriers arrive at the facility throughout the 365 days.

Due to the selective cargo nature, the facility does not have cargo handling cranes. Hence, the pipeline operations and tank storages form the major part of the loading scheme.

The handling of cargo from the Oman LNG plat takes place through Qalhat for major exports. Hence, the facility is responsible for driving industrialization in the region to new heights.

The operating pier is in the form of a T for operational layout. Its local network allows pre-arrival documentation through Oman’s authorities for safety regulations. The port has an inclusive LNG storage and handling facility, occupying 35% of the area.

However, the major transfers take place through the LNG unit of Oman. Due to its cryogenic abilities, the power requirements of the port are higher despite no fixed machinery. At present, the port facility’s staff strength is under 500 for regular status.

The shipping expanse of Oman is a diverse and profitable one for its national income. It also benefits from its natural resources and geographical location of mineral-rich status. Meanwhile, the Sultanate of Oman also expands its relations with the allies for a sound military status.

Hence, the major ports in Oman also present a diplomatic gateway for relying on its partners. Oman’s trade index of 0.46 with China shows its Asia-Friendly approach for shipping. However, the shores of Oman directly connect to 120 countries through major lines.

With 1.6% of the total LNG world share, Oman is a significant contributor to green change. The sensitive nature of cargo restricts major traffic but draws profits over $20 million. The 5 main port facilities post profits in this range for a prosperous scope of shipping in the country.

16
SeaKnow
Write a comment
No comments yet. Be the first to add a comment!
First time here?
By continuing to browse the site, you agree to our use of cookies.