How Are Cruise Ships Powered?

Cruise ships require a lot of power. And rightfully so! As they carry close to 3000 passengers with 500-1000 crew members at any time.

Most of the power of the ship is consumed by the large air-conditioning plant that takes care of passenger comfort in suites and public spaces.

The propulsion plant of cruise ships, consisting of giant synchronous propulsion motors and associated equipment for speed and direction control is a large consumer too .

The tunnel thrusters, both forward and aft, stabilizers, machinery loads, galleys, the numerous lighting and hotel loads, ensure that there is a significant demand for power at any given time. The demand is especially more when the ship is sailing. 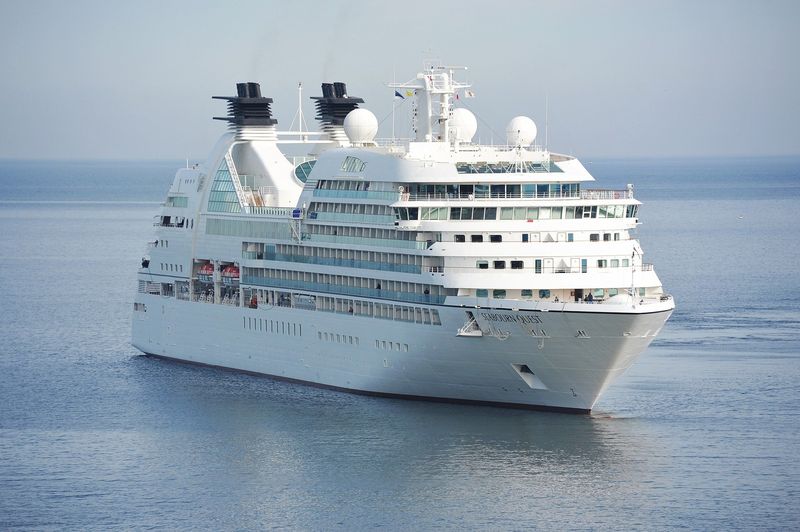 Cruise ships are equipped with multiple Diesel Generator sets to satisfy these power demands. These generator sets are larger and much more powerful than the DG sets found on a typical cargo vessel.

Due to their large size, they command a separate compartment in the ship’s machinery space. This is called the DG room. Most modern passenger ships have two separate DG rooms, forward and aft, separated by a watertight bulkhead.

Each DG room has its independent air, fuel, lubrication and cooling water supply systems. This is for the purpose of safety and redundancy keeping in mind emergencies like fire and flooding.

The diesel engine prime-mover drives the alternator. The alternator supplied 3-phase power usually of either 6.6 kV or 11 kV to the main HV busbar from where it is either used directly or stepped-down to lower voltages. 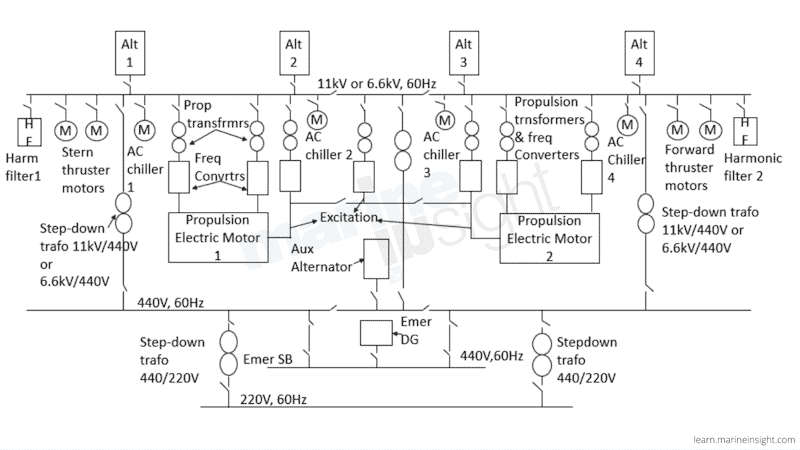 A typical passenger ship power distribution system is shown in the above illustration.

As we can see, the diesel generators (shown 4 in number) supply 3-phase high-voltage power to the HV busbar rated at either 6.6kV or 11kV.

There are different voltage demands on cruise ships according to the equipment. AC chillers, propulsion motors and tunnel thrusters typically have a high current demand. They get the supply from the HV busbar.

The Propulsion Electric Motors (PEMs) are a part of the diesel-electric propulsion powerplant. They require variable speed/torque in the case of fixed-pitch propellers. These are provided by thyristors or Silicon Controlled Rectifiers in the form of frequency convertors or cyclo-convertors.

Directional controls (ahead and astern movements) are obtained by changing the input phase sequence of the supply. This is by interchanging any two phases with the help of thyristors.

Each PEM has two separate stator windings known as half-drives. In case of failure of one half-drive, the other one operates the PEM, though at reduced power. Each half-drive has its own propulsion transformer and frequency converter.

Each PEM also has its separate excitation circuit. This is a direct current (DC) supply obtained from the main busbar after transformation and rectification. There are also two harmonic filters provided, at the port and starboard ends of the main HV busbar. These filter out unwanted harmonics generated by frequency converters and other HV components.

The 440V section takes care of most of the engine-room machinery loads such as pumps, compressors and fans. In addition, deck machinery and hotel loads are also supplied by it. The 440V busbar is fed from the HV busbar via step-down transformers.

In addition to this, there is also an additional auxiliary diesel generator for the restoration of power during blackout situations. This generator can be started to power the 440V busbar independent of the main supply, in order to prepare the plant for restart.

The auxiliary DG main breaker is automatically disconnected when the main DG starts and connects to the busbar.

An emergency generator is also available as per SOLAS, located above the uppermost continuous deck and away from the machinery spaces. This must start and come on load within 45 seconds of a power failure and supply power to the emergency switchboard. The switchboard provides power to selected critical equipment during blackout.

The emergency switchboard supplies power for the emergency lights, battery chargers, navigation and communication systems, a steering gear motor, sprinkler/hyper-mist pumps, a fire pump, a bilge/ballast pump, auxiliary DG pre-lube pumps, watertight doors, alarm and control systems and fire alarm system for a period of at least 36 hours on passenger vessels. On some vessels, power for one of the fuel oil supply pumps, booster pumps and starting air compressors are also supplied from the emergency SB.

The 220 V section takes care of the lighting loads and power outlets in accommodation and public areas. The 220V section is supplied from the 440V busbar by step-down transformers. 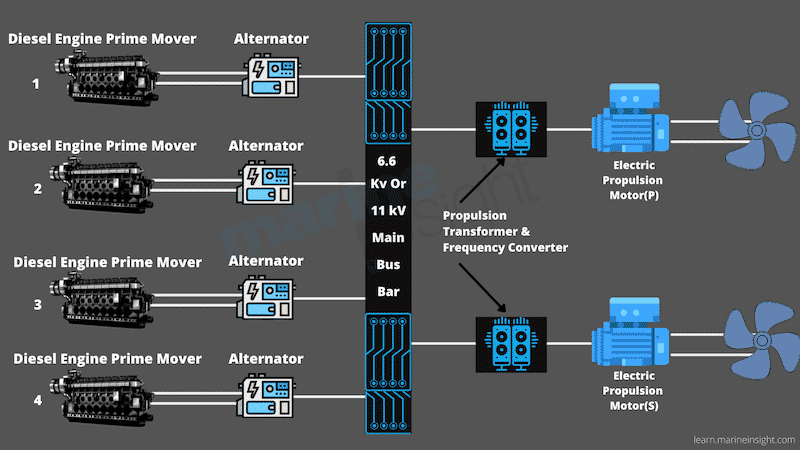 Most cruise ships are propelled by diesel-electric propulsion. The reason for this is that it has a lot of advantages over conventional propulsion system. These are: –

DE propulsion does away with the need for the installation of a huge centralized 2-stroke main engine and auxiliary engines as on cargo ships.

Instead of this, the job of supplying electric power for the ship loads and for propelling the ship is carried out by the main generators. These generators allow for huge space saving and offers flexibility of location and arrangement.

The propulsion motors are themselves much more compact and lighter than conventional engines and being two in number. They allow for even distribution of weight athwartships.

This is even more amplification for DE propulsion fitted with azimuth podded propellers in which the need for shaft lines, stern tube, steering gear/rudder and stern thrusters is dispensed with.

The use of solid-state devices (diodes and thyristors) in the form of electronic converters for power circuits has enabled a single source of main electrical power (main DGs) to be used for all shipboard power requirements. This means doing away with the need for separate main and auxiliary generators.

The other lower voltage ship loads are also supplied from the HV busbar through step-down transformers thus eliminating the need for additional gensets and reducing costs.

Slow-speed/part-load running does not affect the specific fuel oil consumption in DE drives in the same way as it affects conventional direct-drive engines. This is because the speed/torque is varied electrically by changing frequency and voltage.

The main DGs, irrespective of propulsion loads, always run at a constant speed and can be started or stopped as per load requirements. This ensures plant efficiency and results in considerable savings on fuel costs.

The electrical/electronic control of speed and direction (reversing), is quicker and smoother than conventional engines which largely rely on mechanical means for the same.

The lighter weight, even weight distribution and compactness of DE drives also contribute in the ease of control.

On passenger ships, guest comfort is of utmost importance. A conventional direct-drive diesel engine comes with disadvantages of high noise and vibration, especially during starting, acceleration and deceleration.

This problem is done away with by employing diesel-electric propulsion. Starting, acceleration and deceleration is much quieter and smoother due to electrical control.

As a consequence of ergonomic design, lesser weight, efficient and optimized operation of the generators and reduced SFOC, emissions are also much less in a DE propelled vessel as compared to a conventional one.

The use of high voltage for DE propulsion is with the view of reducing current and conductor size. This also has the effect of considerably reducing copper, eddy and hysteresis losses.

The DE propeller efficiency is in the region of 87-90%.

An AC synchronous motor is usually employed as a propulsion motor on passenger ships. It is not self-starting unlike an induction motor.

This is because when the rotor is excited with DC current, the magnetic flux produced interacts with the rotating magnetic field of the stator. 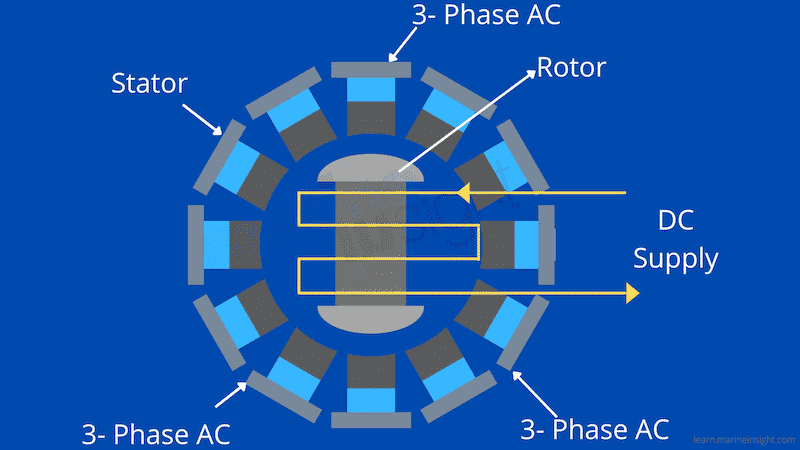 This interaction causes alternate attraction and repulsion due to a change of polarity every instant. Thus, it is unable to rotate because of its own inertia and requires additional help.

It is solvable by the use of either an external prime mover or a damper winding. An external prime-mover rotates the rotor to a speed close to synchronous speed after which DC is available for magnetic locking.

®A damper winding is an extra winding in the rotor provided in order for it to start as an induction motor. Once it starts and the speed nears synchronous speed, DC excitation is supplied and magnetic locking takes place.

Since then, apart from ABB, companies like Rolls-Royce and Schottel have also come up with their versions of the same. 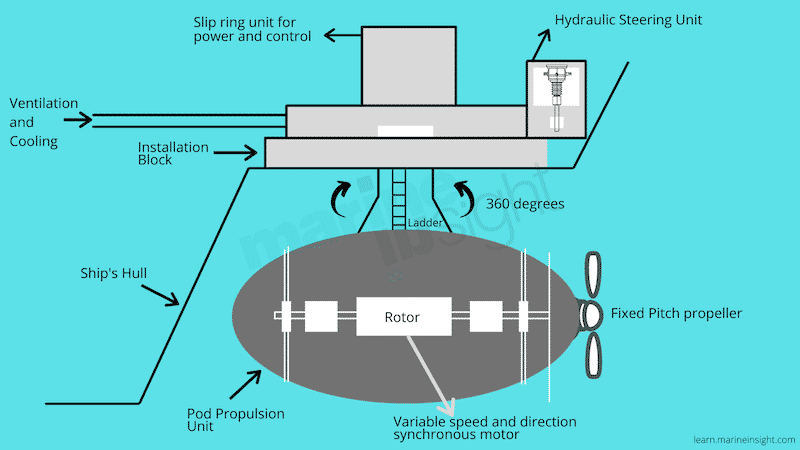 The AZIPOD is the first diesel-electric podded propulsion that is capable of azimuthing through 360 degrees. Their use has done away with rudders and stern thrusters.

Power cables from the HV switchboard connect to the PEM in a conventional DE propulsion system, which converts the electrical power to mechanical power. It then gets transmitted to the propellers with the help of lengthy shaft lines, bearings and thrust blocks.

These power cables instead go to a pod room at the stern where after getting converted to variable voltage and frequency by transformers and converters, they are fed to a slip-ring unit, rendering shaft lines and related equipment needless.

This slip-ring unit transmits this voltage and frequency-controlled power to the synchronous motor placed inside the pod.

A hydraulic steering unit aids in the 360 degrees turning capability which is useful during maneuvering. It is  especially applied in many cruise destinations having smaller ports and limited tug assistance.

Reversing can be achieved either by reversing the propeller rotation or by rotating the pods 180 degrees. The latter helps to reverse the vessels without the need to reverse the prime-mover.

Technological advancement in the design of ships is making rapid advancements and cruise ships are no exception to this. Each passing year, new technologies are being conceptualized, designed, experimented and fitted on new ships.

This makes the chips more efficient, powerful and environment-friendly than their predecessors. It also significantly reduces maintenance, man hours, costs and enhances the quality of life on board for guests and crew alike.

17
SeaKnow
Write a comment
No comments yet. Be the first to add a comment!
First time here?
By continuing to browse the site, you agree to our use of cookies.