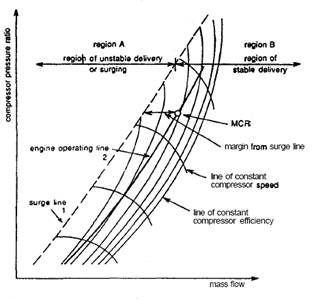 Surging (variously known as coughing, barking etc.) is a vibration of audible level emanating from the compressor end of the rotating element. The compressor, depending upon its speed at any particular time, can only discharge up to a given pressure. If for any reason the pressure in the scavenge space is equal to or higher than this discharge pressure, air will attempt to flow back through the rotating impeller. In essence this is like a centrifugal pump attempting to pump against a closed valve, but with the air compressors the back flow of air throws the rotating element into a vibration which produces the so called barking noise.

There are many causes of surging. It is usually engine initiated. The turbocharger should be matched to the engine’s air consumption rate and pressure across the whole operating range; this being calculated before the engine is built and tested during the shop trials. Matching can be understood from fig.
Area ‘A’ shows that the engine is receiving air at a higher pressure than it needs for a given speed, and as a consequence surging will occur. Area ‘B’ is a stable zone where the engine and the turbocharger will operate in harmony. There should be a reasonable safety margin between the two lines (1 and 2) to allow for turbocharger fouling and general depreciation in engine performance before it enters the surge zone.
An engine travelling from one climate to another will be subjected to great variations in both air density and air temperature. In high temperature, low density climes, usually associated with the tropics, the engine will still have to achieve its rated performance. The turbocharger will be putting out the same volume of air as always but,  because the air is less dense, the mass throughout will be reduced. For the turbocharger and engine to be able to provide adequate outputs under these conditions, it is necessary that they are initially provided with a slightly higher rating than is required in more temperate climes. This is referred to as ‘de-rating’. Similar concepts are applied to engines that have to work at very high altitudes where once again the air density is reduced.