Over the years there have been many forms of fuel pump and fuel injection systems. Present trends have settled, almost without exception, one the ‘jerk pump’ method, and by far the greatest proportion use pumps with the well known helix form of fuel regulation.

The previous section described why the fuel must be raised to the correct pressure and then accurately injected into the cylinder at a precise point. To achieve this, the oil could be pressurised into an accumulator and then released by controlling the opening of the injector (perhaps electronically, or through the timing valves of the common rail method). Alternatively, the oil can be rapidly raised in pressure over a very few degrees of crank angle, and the pressure thus developed can be used to operate the fuel injector. This, in essence, is the jerk system. Such a method creates enormous, and almost instantaneous, forces throughout the system. Consider the cam that generates the pumping effect. For such pressures to be developed quickly, the pumping face of the cam must rise rapidly from the base dwell surface. Then, as the pressure builds up, there will be a substantial back pressure onto this cam face. To carry these high loads without damage to either roller or cam, the cam face must be of adequate area and well lubricated. 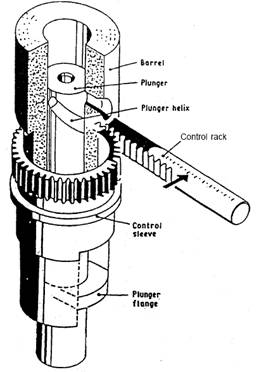