The design of a cylinder cover is very complex, particularly where a large valve operates through its centre. In some of the earlier loop scavenged engines, cylinder covers were simpler components, with a central fuel injector and then pockets for starting air, indicator cocks ect. In those cases the head was often cast iron with some form of steel backing ring to absorb the bending forces created as the head was tightened down. In later designs the head was a solid steel forging of immense strength, the cooling passages of which were formed by the bore cooling process described above.

In ‘uniflow’ type engines, the central exhaust valve may cause problems of stress distribution, and in particular the effective cooling required of the valve seat. Because the centre of the head is taken up by the exhaust valve, it becomes necessary to fit two or more fuel injectors around the cover. These pockets also present problems in terms of strength and cooling. In simplistic terms, the head can be considered to be a top plate supported by a cylindrical wall that is in turn sealed  by a lower plate forming the top of the combustion chamber. As the head is tightened, the top plate is put into a load that attempts to bend it across the supporting walls. Cast iron, not being good at resisting bending stresses, is therefore not particularly suitable for this plate (hence the use of steel rings in earlier models). The pulling down of the top plate puts the side walls into compression. The closing plate may be domed, for strength and to help form a better shaped combustion chamber. As the engines fires, the lower plate tends to lift the head, causing further compression of the side walls and increased bending of the top plate.  The insertion of valve pockets into such a structure aggravates the situation further, particularly when the massive exhaust valve of present engines is used. 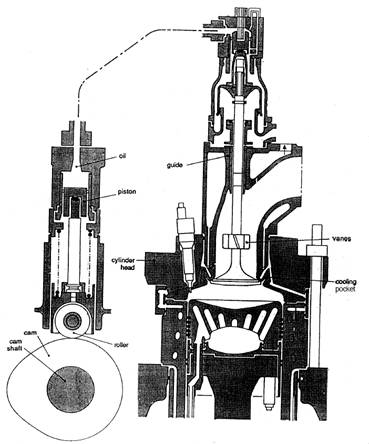 The heads of medium speed engines are very much more complicated, with multi valve heads being common. One problem common to all heads is that of obtaining adequate and effective cooling. It is not correct to think that large cooling passages solve the heat transfer problem. It is the area exposed, the thickness of the material through which the heat is passing and, not least, the speed of coolant over the area that is important. Nor is the formation of steam in these areas unacceptable, assuming that steam is formed as a design feature and not simply because there is an inadequate flow water. From a ‘ph’ (pressure-enthalpy) diagram it is clear that when water is raised to its boiling point (relevant to the system pressure), it is able to absorb a great deal of heat (latent) at the same temperature before being superheated. However, a problem with steam formation is the possible deposition of any anti-corrosion additives used in the circulating water. These may impair heat transfer with consequent localised overheating. The system should therefore be kept clean and the coolant maintained at the correct level of corrosion inhibitor. If this practice is followed the head should give long service without any problems developing.

2
GrandFather
Write a comment
No comments yet. Be the first to add a comment!
By continuing to browse the site, you agree to our use of cookies.