As mentioned in the introduction, the purpose of making electronic engines is focused around the virtues related to “ensuring fuel injection and rate, as well as exhaust valve timing exactly when and as desired”. 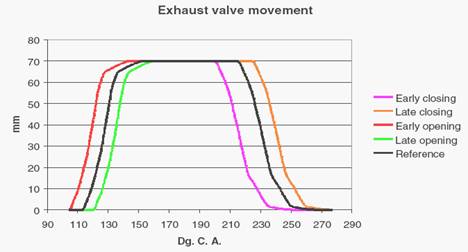 With respect to the exhaust valve movement, this means changing the “cam length”, as illustrated in Fig. 11, by simply changing the point in time of activating the ELVA valve. This can be used to control the energy to the turbocharger, both during steady and transient load conditions. Smoke-free acceleration is a natural benefit apart from SFOC optimisation at any load. Fig. 12 gives an illustration of how already a “different cam length” was implemented on the 7S50ME-C engine in Frederikshavan for 100% load vs. 75% load. 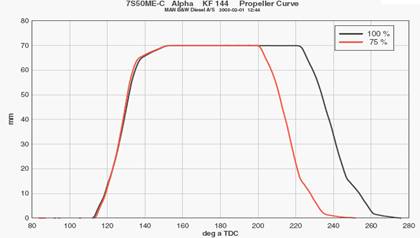 Fig. 12. Exhaust Valve Closing Time
Thanks to the multitude of possibilities with the ELFI, the proportional valve controlling the servo oil pressure to the fuel oil pressure booster, not only the fuel oil “cam length”, but also the “cam inclination and angle” and even the number of activations per stroke can be varied for the fuel oil injection. 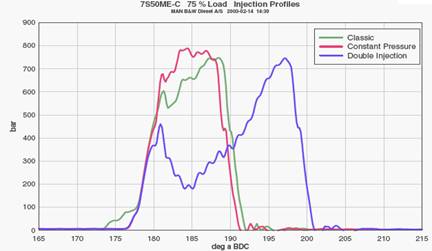 Fig. 13. Injection Profiles
Fig. 13 illustrates different profiles demonstrated during testing of the 7S50ME-C. The double injection profile is specially tailored for a significant reduction of NOx emissions as referred to later. 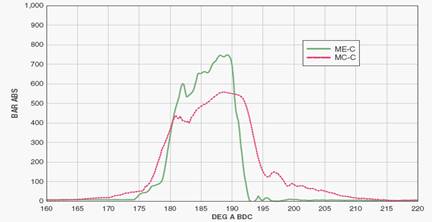 Fig. 14. Injection at 75% load, ME-C versus MC-C
Fig. 14 shows the selected injection rate on that engine at 75% load, compared with what it would have been with a fixed cam. The resulting heat release is the reason for selecting a more intensive injection. A better heat release mirrors a better fuel consumption, also because the Pmax is higher, see Fig. 15. Such data could of course also be realised on a mechanical engine, but now while at the same time maintaining the ability to perform at 100% load. In the low end of the load scale, the possibility for controlling the timing and rate of injection gives the possibility to demonstrate stable running down to 10% of MCR-rpm, i.e. 13 rpm against a water brake only. This could be even more stable against a propeller eliminating the need for stop-and-go operation through channels and canals and making ME engines particularly suitable for shuttle tankers and lightering vessels, as well as for vessels with greatly varying load profile. 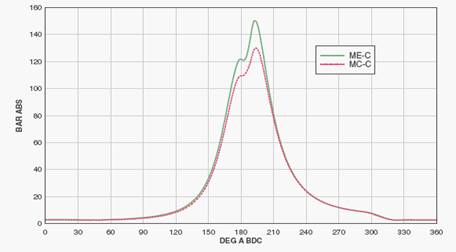 Fig. 15. Cylinder Pressures at 75% load, ME-C versus MC-C
General performance curves for the ME-C and MC-C engines are shown in Fig. 16. The lower part load fuel consumption is achieved by raising the Pmax over the whole load range. In order to avoid too high difference between Pmax and Pcomp, also this pressure is raised by timing control. 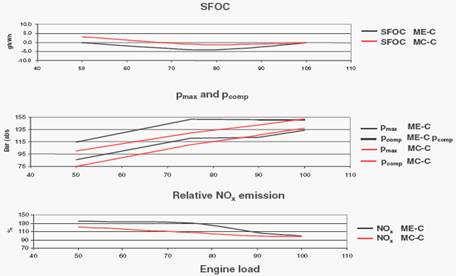 Fig. 16. Performance Curves, ME-C versus MC-C
As also illustrated, the lower SFOC comes at a price in that the NOx increases. For this reason, the first two modes to be incorporated in the control system of the ME engine, as standard, are the “fuel economy mode” and the “low-NOx” mode. Fig. 17 illustrates the coagency between SFOC, NOx, and Pmax/Pcomp for the two modes. 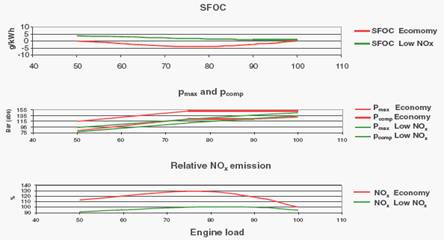 Fig. 17. Performance Curves, Economy versus Low-NOx
It goes without saying that an ME-C engine will comply with IMO’s NOx cap also in the fuel economy mode.
The low-NOx mode is intended for areas where lower than IMO NOx limits do or will apply.
The change from one mode to the other is a matter of seconds only and, of course, is done while running.

5
GrandFather
Write a comment
No comments yet. Be the first to add a comment!
By continuing to browse the site, you agree to our use of cookies.