The mechanical difference between an MC-C engine and its electronically controlled counter-part, the ME-C engine, constitutes a number of mechanical parts made redundant and replaced by hydraulic and mechatronic parts with enhanced function, and summarised below.

The following parts are omitted:

The above-mentioned parts are replaced by: 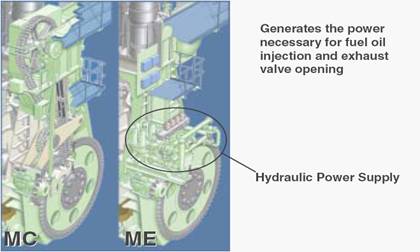 Before engine start, the hydraulic oil pressure used in the mechanical/hydraulic system (for controlling the actuators) is generated by electrically driven start-up pumps. After start, the engine driven pump will take over the supply. 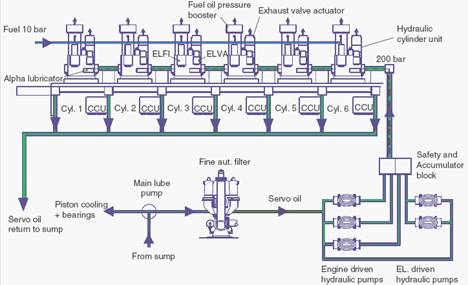 Fig. 2. Hydraulic Oil Loop
The engine driven pumps are gear or chain driven, depending on engine size. If so preferred, all pumps can also be electrically driven. The hydraulic pumps are axial piston pumps with flow controlled by the integrated control system. There are three engine driven pumps, but actually only two are needed for operation. Second-order moment compensators, where needed, can be integrated into the pump drive. Alternatively, electrically driven compensators can be used. If so preferred, the entire hydraulic oil system can be made as a separate, independent system.
Fig. 2. shows the entire hydraulic oil loop with the hydraulic power supply system and, as can be seen, the generated servo oil is fed via double-walled piping to the Hydraulic Cylinder Units of which there is one per cylinder, mounted on a common base plate on the top gallery level on the engine, as illustrated in Fig. 3 and detailed in Fig. 4. In this latter image, also the important electronic control valves, i.e. the ELFI (a proportional Electronic Fuel Injection control valve) and the ELVA (an on-off Electronic exhaust Valve Actuator) are shown. 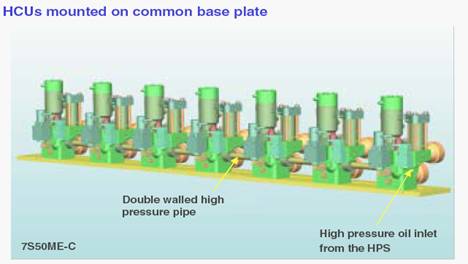 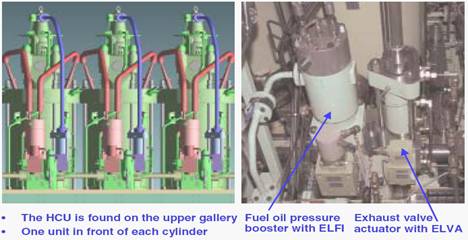 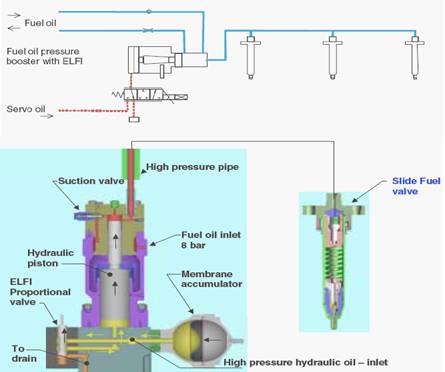 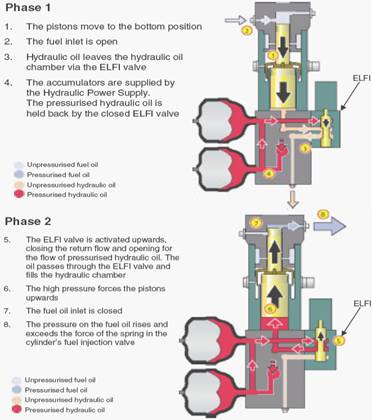 Fig. 7. Fuel Oil Pressure Booster Actuator
Fig. 6 an outline the media and plunger movements in respect to a signal to the ELFI from the engine control system, Fig. 7 shows the impeccable condition of the parts after about 4,000 hrs. of operation. Now more than 10,000 hrs have been logged, and the results are still the same. There has been virtually nothing to report. The fuel oil pressure booster is less exposed to wear than a traditional fuel oil pump and, with its significantly larger sealing length (compared with the conventional Bosch-type fuel pumps), a much longer lifetime can be expected. 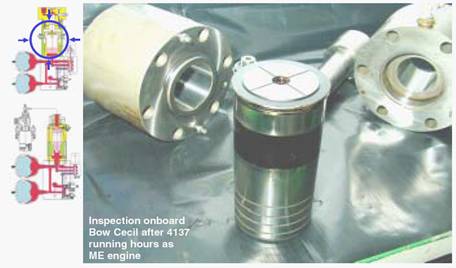 Fig. 8. Exhaust Valve Actuator
Fig. 8 explains in detail how the actuator for exhaust valve responds to the electronic actuator signal from the engine control system.
Another system that benefits from mechanical simplification by being electronically rather than mechanically controlled on the ME engine is the starting air system, Fig. 9. The mechanical starting air distributor is past history. 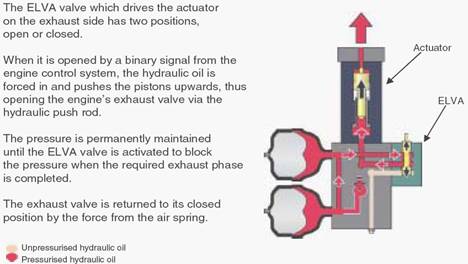 Fig. 9. ME Starting Air System
The Alpha Lubricator system for cylinder oil feed rate control, already with more than 200 sets sold, benefits in the ME engine version by using the 200-bar servo oil pressure as driving force rather than a separate pump station used in the stand-alone systems. The ME execution, therefore, separates the cylinder oil from the servo oil. The Alpha Lubricator is mounted on the hydraulic oil distribution block.
The ME engine control system, simplified in Fig. 10, is designed with the principle that no single failure of anything shall make the engine inoperative. Therefore, all essential computers are with a hot stand-by. 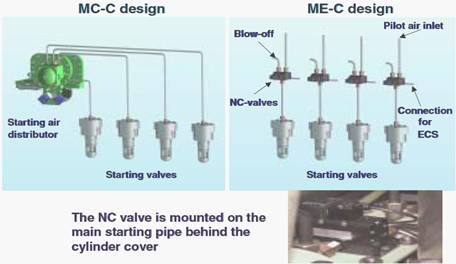 Fig. 10. ME Engine Control System
All the computers in the system, referred to as Engine Interface Control Unit, Engine Control Units, Cylinder Control Units and Auxiliary Control Units, are of exactly the same execution and can replace each other, in that they will adapt to the desired functionality of the particular location once installed, including if replaced by a spare. The computer, often referred to as a Multi-Purpose Controller, is a proprietary in-house development of MAN B&W Diesel. Thus, we cam ensure spare part deliveries over the engine’s lifetime. The Local Operating Panel, incl. Cylinder Control and Auxiliary Control Units, is mounted on the middle gallery of the 7S50ME-C made in Denmark. The Control Units can, of course, also be located elsewhere.
As to installation aspects, apart from the cabling of the control network, an ME-C engine and a MC-C engine are practically the same for a shipyard, as detailed below:

Actually, there is a small simplifications in that the tooling for the exhaust valve system and fuel oil pressure booster is simpler.

12
GrandFather
Write a comment
No comments yet. Be the first to add a comment!
By continuing to browse the site, you agree to our use of cookies.