Aframax tanker crew in distress and another ship seized in India, both run by same Russian company 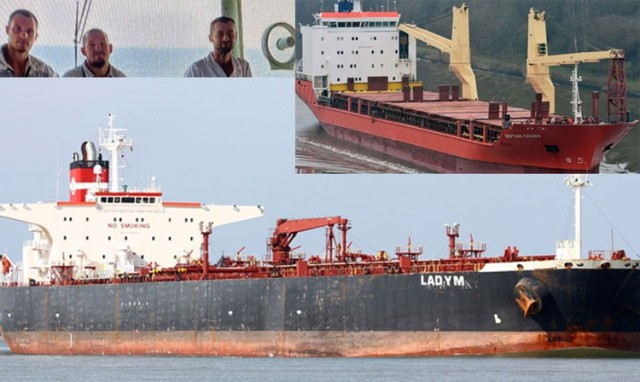 Russian Aframax crude oil tanker INDA is in trouble again, this time it’s her crew, calling for help and claiming they’re held on board of tanker for months, without payment, with supplies running out, fast. Tanker is anchored in Gujarat State waters, Western India, since Jul 14. Crew were promised by TRANSMORFLOT managers, that tanker is to be dismantled at Alang, with all crew to be repatriated, soon. Nothing happened yet, no movements, no actions. Prior to arriving at Gujarat waters, tanker was cruising west of Gulf of Khambhat, Gujarat, since Jul 4.
In Feb-March this year, tanker was involved in scandalous story, when Malaysia refused to allow her to its’ port with cargo of Iranian crude.
Understood oil was offloaded somewhere, probably in India, so tanker should be in ballast. Relatives of several crew members wrote and sent letter to Russian Embassy in India, to Russian Ministry of Transportation, to Astrakhan Prosecutor General and to Russian media. No responses yet, article with crew sad story published by local outlet, was later removed from outlet website.
If it’s not enough, here’s more – tanker is operated by the same company, which is operating general cargo ship MAIA-1, seized, with military cargo on board, in India on Jul 18 after Kochin High Court ruling, for bunker unpaid bills.

Source:
https://www.fleetmon.com/maritime-news/2022/38921/aframax-tanker-crew-distress-and-another-ship-seiz/
179
Написать комментарий
Нет комментариев. Ваш будет первым!
Нет аккаунта?
By continuing to browse the site, you agree to our use of cookies.